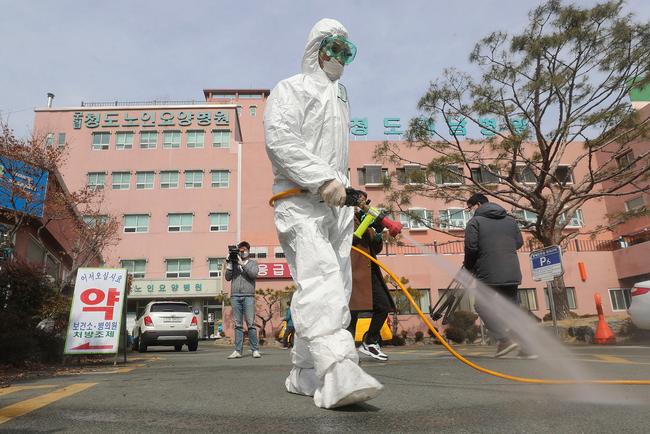 As the number of confirmed coronavirus infections in South Korea goes parabolic, the latest development in the Pacific Rim nation is right out of Arkham Asylum.

But first, the big picture: South Korea reported 229 new confirmed cases on Saturday, as the number of infections more than doubled in a day to 433, an eightfold jump in just four days. As the chart below shows, the number of new cases in South Korea has now doubled each day for the past 4 days, a true exponential increase. 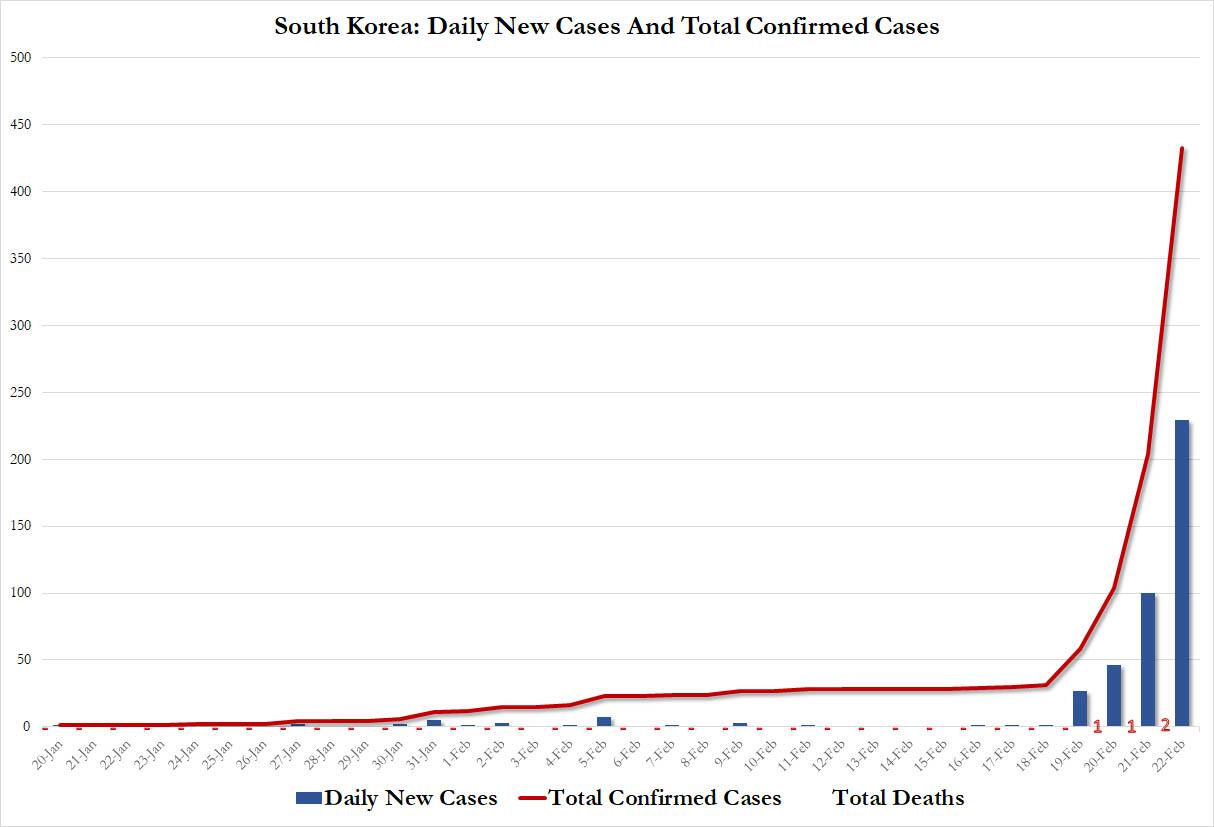 The country’s prime minister, Chung Sye-kyun, called the situation “grave,” according to The Korea Times, while the country’s Vice Health and Welfare Minister Kim Kang-lip told reporters that “The situation is entering a new phase.” But the high number of confirmed cases is also because the country’s medical industry has high diagnostic capability, according to experts; with the implication that the real number of Chinese cases is orders of magnitude higher than officially disclosed.

While the current period is still “early stage” the government is cautiously confident that the spread of the novel coronavirus could be contained surrounding the Daegu area, Kim added, although that particular cruise ship has now officially sailed.

Indeed Daegu, South Korea’s fourth-largest city, is where the initial cluster of cases of emerged; it has since been designated a “special management zone.” The central government is channeling medical support to the zone with more staff, hospital beds and equipment. In Daegu, more than half of South Korea’s cases have been among members of a secretive religious sect who often crowd together in worship, and their relatives or contacts. Another 111 are patients or staff members at the Daenam Hospital in Cheongdo, where the two South Koreans who have died of the virus had been admitted.

It gets worse: more than 1,250 members of the sect, the Shincheonji Church of Jesus, have reported potential symptoms, and officials are still trying to locate 700 members so they can be screened. “In accordance with law and principles, the government will sternly deal with acts that interfere with quarantine efforts, illegal hoarding of medical goods and acts that spark uneasiness through massive rallies,” Chung said, pointing out just how convenient the coronavirus will be when government seek to squash all future protests.

It gets even worse: Samsung, the world’s biggest smartphone maker, shut down a factory after a worker tested positive. The factory, located in the city of Gumi, about an hour north of Cheongdo, is expected to resume operations on Monday morning, Samsung said. But the floor of the factory where the patient has worked will be closed until Tuesday morning, it said. We wonder how long until it truly reopens.

But the scariest development in the past 24 hours is that almost all patients at a psychiatric ward of a South Korean hospital tested positive for the coronavirus, with local reports saying members of the abovementioned Shincheonji Church of Jesus sect which has rapidly emerged as the single biggest cluster of new S. Korean cases, had attended a funeral in the same complex.

South Korea’s two confirmed deaths from the virus were also from the Daenam Hospital in Cheongdo hospital’s mental health division, Korea’s Centers for Disease Control and Prevention said Saturday. Both patients had been moved out of the psychiatric ward for medical treatment before their deaths, Vice Health and Welfare Minister Kim Kang-lip said at a briefing.

In other words, of the total 443 confirmed cases, more than half, or  231 were linked to Daegu, sect, while at least 111 – including four nurses – were from the psychiatric ward of the hospital in Cheongdo County. The two clusters account for almost 80% of the confirmed cases.

Cheongdo, famous for its bull-fighting competition, is a rural town near Daegu. The funeral of the brother of the Shincheonji’s leader took place earlier this month in Cheongdo, and health officials are examining ties between the church and the hospital. Local media reports say the funeral was held in the building that houses the psychiatric ward.

According to Bloomberg, Shincheonji, formally known as Church of Jesus, the Temple of the Tabernacle of the Testimony, said on its website that it’s trying to list attendees of the funeral and denied its Chinese followers were part of the crowd at the ceremony. Hundreds are still unaccounted for.

Earlier this week, the country’s disease-control center said an inpatient who died after suffering for a long time with chronic pneumonia was confirmed only after his death to have been infected with the coronavirus. The 63-year-old man had been at the hospital’s mental health unit since late 2017, the KBS broadcaster reported.  The second fatality was a patient from the same ward, identified only as a woman born in 1965. She died shortly after being transferred to another hospital in Busan because of a lack of beds, the center said.

As the pandemic is now set to claim more new cases in South Korea than in China, where Beijing has made a total mockery of data reporting, we expect many more tragic fatalities as one government after another seeks to mitigate the risk posed by the covid pandemic – perhaps in hopes that just like stock market crashes, central banks can make this whole thing just go away – in order to avoid a social panic, when in cases like this letting people know the truth instead of having the government decide for them what is best, is the best strategy… and is why it will never happen.