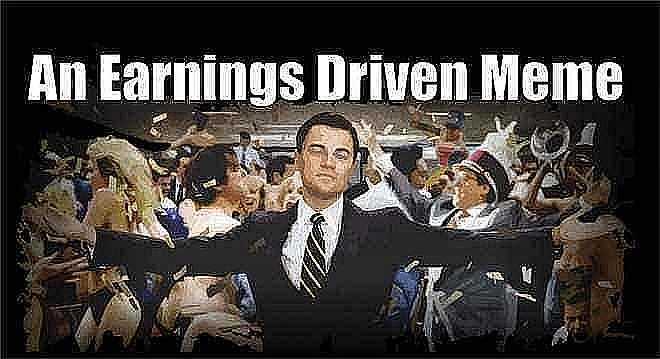 “A meme (/ˈmiːm/ MEEM) is an idea, behavior, or style that spreads from person to person within a culture – often with the aim of conveying a particular phenomenon, theme, or meaning represented by the meme. A meme acts as a unit for carrying cultural ideas, symbols, or practices, that can be transmitted from one mind to another through writing, speech, gestures, rituals, or other imitable phenomena with a mimicked theme. Supporters of the concept regard memes as cultural analogues to genes in that they self-replicate, mutate, and respond to selective pressures.” –Meme, Wikipedia

Fueled by an historic level of central bank liquidity in a market impervious to price discovery, it’s all about the meme.

I suppose that if something is said enough and is infrequently contested, the many think it is true!

Consistently advancing and uninterrupted rising stock prices have a way of spreading fallacious arguments not grounded in fact. Here are some recent examples of that meme — namely, of an earnings-driven market — over the last two weeks, but there are many more repetitions of the meme on a daily basis:

“This is very much earnings-driven.”
—Michael Shaoul, Marketfield Asset Management

“Equities have largely been driven by global liquidity, but they are now being driven by earnings.”
—Kevin Boscher, Brooks Macdonald International

“Most of the market action in 2017 has been earning-driven.”
—Dan Chung, Alger Management

“The action is justified because of earnings.”
—James Liu, Clearnomics

On Friday I tossed out the following Societe Generale chart that lends support to the view that this has not been an earnings-driven market, a view adopted by the consensus of strategists, commentators and other talking heads.

That view is accepted, and, surprisingly, I know of not one business media commentator who has challenged this common assertion from their guests.

In the chart below, a review of 12-month forward price-to-earnings (P/E) ratios indicates that for the top 10 contributors to the S&P 500’s advance, the one-year forward P/E has increased — in some cases quite considerably — for each of the 10 constituents since November 2016. It should be abundantly clear that from the time of Trump’s election a year ago we clearly have been on a path of a valuation expansion and not an earnings-driven market: As I wrote less than three weeks ago, this is the new meme, but it increasingly resembles “Group Stink.”

Contrary to the pablum delivered by many in the business media, the rise in stocks over the last 12 predominantly has been a valuation-driven story, just as it was in 2016 when S&P 500 profits were up 5% and the S&P Index rose by about 11%.

In an early November column I provided two charts from my friend Peter Boockvar, chief market analyst with The Lindsey Group, as some proof of my point.

The first one shows that the Russell 2000 Index has risen by about 25% since the Trump election despite an 8% to 9% reduction in consensus 2017 Russell Index earnings expectations. The second chart shows the small change of 2%, or $3 a share, over the last 12 months in consensus expectations for the S&P 500’s 2017 earnings picture in the face of a large advance of more than 16% in the S&P Index: “When you get into statistical analysis, you don’t really expect to achieve fame. Or to become an Internet meme. Or be parodied by ‘The Onion’ – or be the subject of a cartoon in ‘The New Yorker.’ I guess I’m kind of an outlier there.” – Nate Silver

Mind the meme — to me(me), it is another example of the irrational being rationalized in our markets.

The profits-driven message being conveyed by the many fails to conflate with the reality that valuations have been the most important driver of higher stock prices.

'The View' Sent Into Chaos After Two Hos

It Never Happened: Photographer Who Took