Never have the markets had such a shock where economies, supply chains and health have all stretched to critical mass.

What were extreme market conditions one day became instant entries in record books. Every new day seems to bring increased panic and downside.

On a comparative basis to this market meltdown, only the 1929 crash compares. The charts look eerily similar… 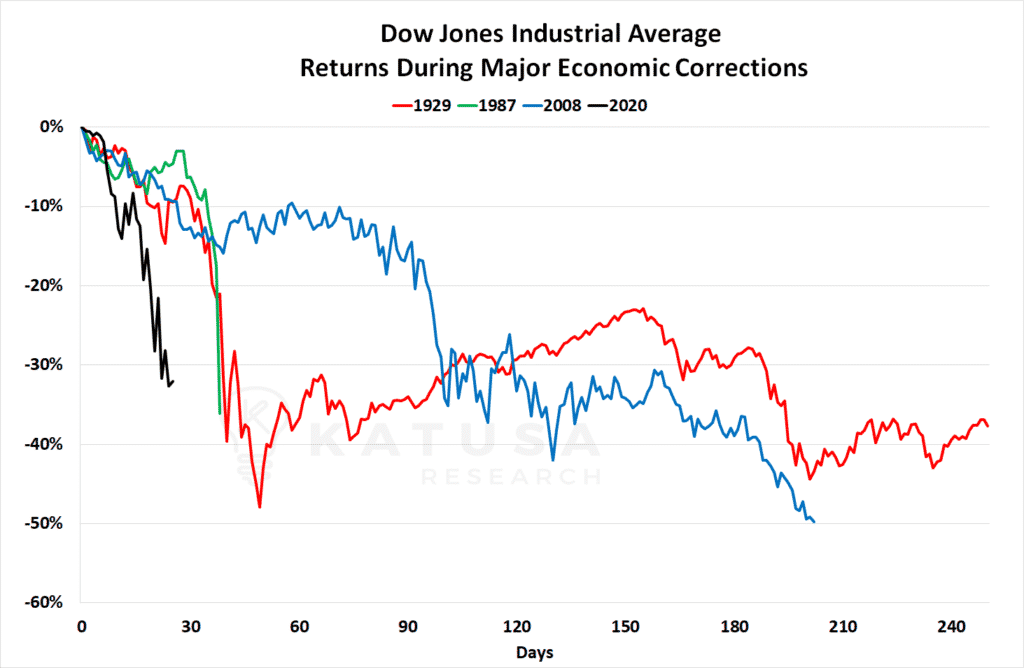 Dumb Money Confidence indicators from various outlets are reaching all-time lows. This means that novice investors have all but thrown in the towel.

This past week saw the most down 90% down volume days in the history of the exchange.

And the ultimate gauge of sentiment – google search and news outlets – are writing negative and “bear market” articles near the record 2008-09 levels.

Now, this is going to be painful. And difficult to digest.

You can feel it everywhere. It’s easy to talk about being a contrarian but now that’s it time to step up to the plate – many investors are paralyzed.

Wall street analysts, major banks and investment bankers are downgrading stocks faster than any time since 2008.

I know of many funds that are on the edge of insolvency.

The response around the globe to the economy, to supply chains, to businesses and to workers is unprecedented.

Entire industries will be altered.

Oil just crashed through $25 per barrel. Many oil companies are in serious trouble. Many oil service companies face a massive storm ahead.

Silver collapsed from $20 to $12. Mines are being shut down and many companies can’t make money at the current silver spot price.

In January we warned that Copper was signalling trouble ahead and we stayed clear of copper companies. Now you’ve seen major copper companies share prices melt lower, falling on the back of a sinking copper price.

Gold companies have corrected hard. Some mines are shutting down. Stock prices of world class producers are acting like juniors.

This is true alligator investing…

Waiting in the wings, cashed up, for opportunities that come around once in a decade. Or once in a generation.

But put money in the wrong place, or for the wrong time period – and you will lose. The truth is that investing in these times is very difficult. And I’ve now seen a few crashes in my career – and navigated my portfolio through the storm.

I want you to know that the whole team at Katusa Research is burning the midnight oil, as we’ve prepared for a crisis like this. But no one expected it to come so swift and involve the entire globe.

As such, there will be government handouts for everyone: students, business and everyone in between. But there will be nothing for the investor like you and I, except for very high risk and very high upside in exchange.

When the Fed cut rates on Sunday March 15th, I messaged my top analyst that we had to get to work immediately that day. Things would start to unravel quickly.

Later that night I sent a very important alert to my subscribers detailing what I see happening to the major commodity sectors.

Since that alert, there have been many major market changes.

So, I am publishing a special emergency briefing. Click here to watch the presentation right now.

I’m going to go over everything you need to know in this market meltdown:

In short: If you’re like most people, you might be sitting on the sidelines right now… or worried the ongoing crash could wipe out your earnings…

But when this crisis is all over, the natural resource market in particular will present immense opportunities for investors.

Don’t miss my briefing about these turbulent markets.

The post An Emergency Briefing from Marin Katusa appeared first on Katusa Research.