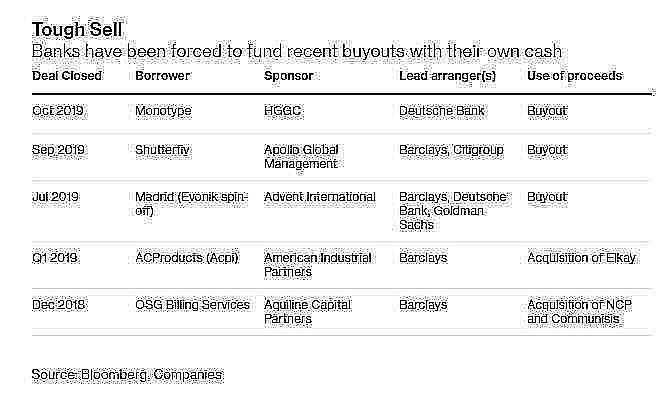 Global banks are involuntarily stocking up on risky corporate loans as a result of investors beginning to cut risk in the credit markets, according to Bloomberg.

Underwriters that could once easily offload risk associated with corporate debt are finding that coming up with new suckers investors isn’t as easy as it once was. As a result, banks like Barclays and Deutsche have been stuck with $1.5 billion in leveraged loans that they’ve struggled to sell off in recent months.

It’s a small sum relative to the nearly $170 billion in leveraged loans outstanding in the U.S. and Europe, but it’s notable due to the “broad strength” of the credit markets of late. The strength in credit stands in contrast to late last year when a sharp selloff left the banks holding the bag on $3.6 billion in unsold debt.

Steven Abrahams, head of strategy at Amherst Pierpont Securities said: “The mix of loans coming to market right now is very difficult to absorb. It’s a very unusual story that leveraged loans and collateralized loan obligations are showing stress, even though the rest of the market is pretty benign, if not bullish.”