In what appears to be Taco Bell’s unconventional answer to McDonald’s bringing back the Crispy Chicken Sandwich, the “Mexican-inspired” fast-food giant has introduced several popular vegetarian options, including a partnership with Beyond Meat, that it hopes will entice more millennial and Gen Z customers. 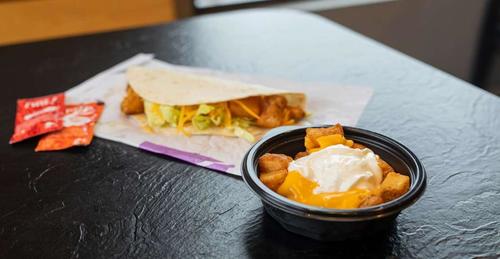 The Yum Brands-owned chain is resurrecting its popular potatoes dishes, while also testing a menu item with a Beyond Meat substitute after last year’s menu cuts left many customers seriously disappointed. The company wouldn’t say what the changes are exactly.

“I would say that it’s going to be unique to the things that you’ve seen elsewhere, so we’re definitely going to put our Taco Bell innovation and spin on it,” said Liz Matthews, Taco Bell’s global chief food coordinator.

Taco Bell imposed the cuts during the beginning of the pandemic to try to save on ingredients and manpower.

Big news for vegetarian Taco Bell fans: The chain has heard you. Potatoes return to the permanent menu on March 11. And it’s working with Beyond Meat on a plant-based protein test. #tacobell

The decision to cut the “Mexican Pizza” a favorite among vegetarians, led to a serious backlash against the brand.

News of the collaboration sent Beyond Meat share surging 4%+ in a single day.

Starting March 11, customers will be able to order the Spicy Potato Soft Taco and Cheesy Fiesta Potatoes for the first time since they were excised from the TB menu back in September. But what’s more, Beyond Meat is already developing a taco-style meat to be used in a variety of Taco Bell dishes