Biden Reinvents Himself, Drags Wife Around Iowa For Massive ‘No Malarkey’ Push

Joe Biden is reinventing himself as he embarks on an eight-day bus tour of Iowa, a key state which he’s largely failed to impress – unlike many of his Democratic competitors angling for the White House in 2020.

Fired up and ready to go for the #NoMalarkey barnstorm! pic.twitter.com/4lpU7waqzh

The “No Malarkey!” tour got off to an awkward start on Saturday, when Joe bit former Second Lady Jill Biden on the finger as she introduced him at a Council Bluffs kickoff event.

One almost has to feel sorry for Jill. After going out on a high note in 2016, she watched the establishment reanimate her senile husband – only to have clips of him creeping on women and children flood the internet. Then there was Hunter Biden’s rental car crackpipe adventures, Burisma, and now an out-of-wedlock grandchild with an Arkansas stripper. And then Joe bites her finger as they announce the stupidest campaign slogan ever. 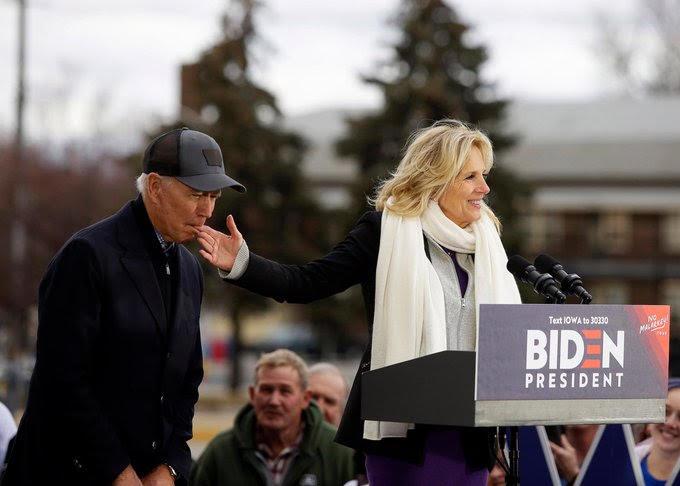 “We’re going to go to 18 counties, on a 660-mile trip across the state, and we’re going to touch on what we think is a forgotten part of most campaigns — the rural part of your state, rural America,” said Biden, speaking at the Saturday event.

For months, Biden’s campaign has been dogged by criticism among supporters and critics alike that his Iowa operation was slow to get off the ground. Given the nature of the caucuses, where voters choose the nominee by gathering in public spaces like school gymnasiums, churches and community centers for one night in February, a robust organization that encourages people to participate is critical to success. –Bloomberg

Aside from the eight scheduled stops, Biden will take two side-trips; one in Chicago to raise money – returning to Iowa on Tuesday for a single organizing event in Mason City, and then a jaunt to New York that evening to attend more fundraisers before returning on Wednesday afternoon for more Iowa action.

Seeking to turn Biden into an affable elder statesman after a series of ‘Mr. Magoo’ gaffes, the Biden camp decided to go hard at the depression-era demographic with the slogan “No Malarkey!” – something his grandfather used to say.

As Bloomberg describes it, “The “No Malarkey” theme — emblazoned on the side of Biden’s tour bus — nods at both the candidate’s reputation for truth-telling and Trump’s supposed aversion to it.”

“The other guy’s all lies, so we want to make sure there’s a contrast,” said Biden at one stop.

Of course, things may get awkward when someone asks Joe about ‘if you like your health care plan, you can keep it,” or discussing Hunter’s business dealings with his stimulant-addicted son.

Is Biden campaigning for Trump? “Look at the promises made. Look what’s happening now, Iowa is growing, Iowa is moving” pic.twitter.com/wigJJEgkOH

Biden will be traveling with former Iowa governor Tom Vilsack, who served as Obama’s agriculture secretary. Also joining the tour will be Vilsack’s wife, Christie.

As he stops in small towns, he’s sure to allude to rural values and rural needs and to mention that he’s secured the support of Vilsack, the popular two-term governor, who urged Hillary Clinton’s 2016 campaign to spend more time in rural areas.

“With all due respect to folks who talk about bold, new ideas, the reality is, you’re going to have an incredibly difficult time until the country comes together,” Vilsack told Bloomberg news in an interview in November. –Bloomberg

That said, Vilsack thinks Biden – the current Democratic frontrunner, is best positioned to enact progressive change because he appeals to a much broader audience than other candidates – particularly in swing states.

“The vice president is speaking to a much broader audience than some of the other candidates. I think he’s speaking to the audience that any Democrat is going to have to speak to consistently through this campaign in order to have the people who will decide this election in Pennsylvania and Michigan and Iowa and Wisconsin basically saying, ‘Yeah this guy has been consistent throughout,’” said Vilsack.

If Biden’s attempt to reinvent himself in Iowa doesn’t work as planned, what does it mean for the rest of the 2020 campaign?