A Black Lives Matter-supporting teacher took to Twitter to assert that 2+2 only = 4 because of “western imperialism.” 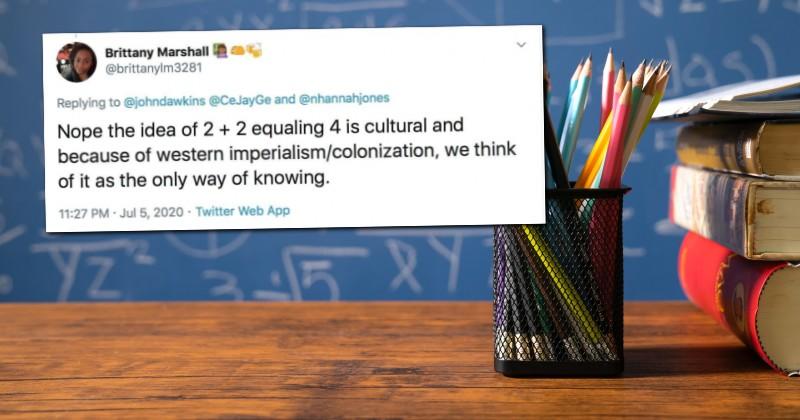 Brittany Marshall’s tweet went viral after she claimed during the course of a discussion about racism, “Nope the idea of 2 + 2 equaling 4 is cultural and because of western imperialism/colonization, we think of it as the only way of knowing.”

Marshall, who includes her pronouns in her bio, lists her occupation as “teacher, scholar, social justice change agent” and apparently is studying for a PhD at Rutgers.

People like this are a reason why there’s a need for written instructions on shampoo bottles.

Her bizarre statement is yet another example of Intersectionality, the pseudo-intellectual garbage feminist notion taught in all major universities that racism and sexism are prevalent throughout all areas of society and are intertwined.

In this case, Marshall appears to be arguing that maths itself is racist, an argument that has been made by numerous social justice warriors down the years, some of whom question why ‘Western Math’ is in common use and not other methods such as the way Aborigines count (maybe because we’re western and not Aborigine).

The notion that 2+2 might not = 4 is of course lifted from George Orwell’s 1984, when the one party state was able to torture dissidents into believing it could equal 5.

“Unfortunately it’s nothing new,” remarked one. “There are videos circulating showing black students promoting to stop science because it represents white supremacy. They would prefer magic and voodoo.”

“Scary thing is, this person is a teacher probably preaching the same nonsense to our children,” said another.