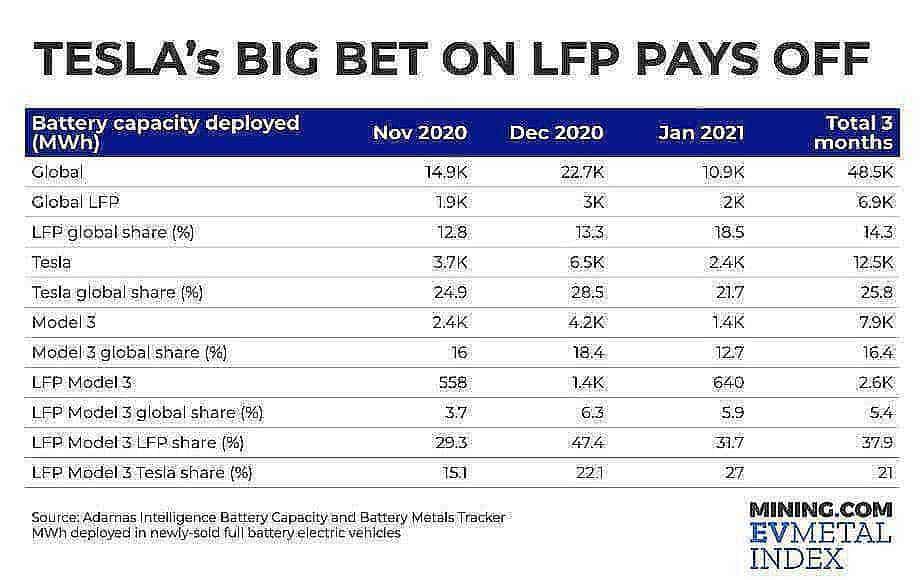 Apart from buses and special purpose vehicles, LFP is associated with tiny (and probably tinny) city runabouts like Wuling‘s Hong Guang Mini EV (jv with GM) which this year overtook the Model 3 as China’s bestelling EV.

NCM (nickel-cobalt-manganese) and NCA (nickel-cobalt-aluminum) dominate the market for electric cars and LFP fares badly against ternary cathode batteries in terms of energy density – and therefore range and charging.

There was even a question of whether the LFP Model 3 would qualify for full Chinese subsidies, which kick in above 165Wh/kg, due to the technology’s shortcomings.

Fast forward to today, and Tesla’s gamble has been an unqualified success.

The strategy was also prescient – cobalt and nickel prices (even taking into account the recent pullback for nickel) have rallied hard over the past year and competition over secure, long-term supply is more fierce than ever as EV sales reach a tipping point.

Tesla CEO Elon Musk has expressed worry about nickel supply on a few occasions in recent months and last week touted LFP as the future for “standard range” Teslas.

In only its second full month of sales, the 55KWh LFP-battery Tesla Model 3 captured 5.9% of the total global full electric car market in terms of battery capacity deployed, according to data supplied by Adamas Intelligence.

Boosted by deliveries to Europe, it made up 46% of all Model 3 sales in January and an astonishing 32% (December it was 47%) of the battery capacity in all LFP-equipped cars worldwide.

The success of the Model 3 also lifted LFP’s overall share of the global battery market in terms of capacity to 18.5% in January, according to Adamas, which tracks demand for EV batteries by chemistry, cell supplier and capacity in over 90 countries.

That’s from only around 1% at the beginning of last year and 3% in June.

Alla Kolesnikova, Head of Data and Analytics at Adamas, says 2020 saw a resurgence of LFP in China:

“LFP battery capacity deployed onto roads increased six-fold and we continue to see cathode manufacturers ramping up output and a growing list of the automakers in China announcing upcoming model-versions that will incorporate LFP cells. Among the more prominent are Xpeng, Seres and VW.”

Cheaper by the watt

Using Adamas data on the loadings of raw materials and battery capacity deployed for the three chemistries in Model 3s sold worldwide, it is possible to calculate what the company saves by using LFP.

Adamas only includes end-user registered EVs in the data, not projections from production figures or from the wholesale market. In November, December and January more than a 125,000 Model 3s found new owners.

Using the February Benchmark Mineral Intelligence index prices show a value of more than $45 million for the lithium and graphite in all Model 3’s sold during those months.

However, the longer range, high-performance NCA and NCM equipped Model 3s sold over the three months came with $74 million worth of nickel and another $21 million worth of cobalt (manganese sulfate was less than $1m for the period).

Cobalt has shot up in price this year to more than $65,000 a tonne, while nickel in the battery supply chain traded north of $20,000 in February, according to Benchmark.

Without an LFP variant in the mix, Tesla and its battery suppliers’ outlay on nickel, cobalt and manganese would have been north of $125 million.

Tesla has a habit of cutting prices – more than a dozen times last year – to move stock,  with LFP they have lots of room to continue this strategy.

Kolesnikova says cathode-related innovation is thriving on both LFP and nickel-rich fronts and and the market is calling for both:

Kevin Gunan Shang, an analyst at Roskill, says battery and automakers in China have quickly latched onto Tesla’s success with LFP and are racing to increase capacity.

The technology itself has also made great strides with so-called ‘cell-to-pack’ manufacturing, which reduces the weight of non-active materials, composite graphite-silicon anodes, and pre-lithiation, improving on LFP’s inherent limitations.

LFP takeup outside China is also expected to rise with the expiry of a crucial LFP patent in 2022. The patent, held in part by Hydro Quebec and Johnson Matthey,  makes LiFePO4 conductive by coating it with carbon.

LFP is also increasing in popularity for other applications such as renewable energy storage, two and three-wheel vehicles and backup power for 5G base stations, according to Shang.