Global production of crude steel – ingots, semi-finished products (billets, blooms, slabs), and liquid steel for castings – dropped 13% in April compared to April last year, to 137 million metric tonnes (Mt), according to the World Steel Association. While China’s production, at 85 Mt, was flat with a year ago, production by the rest of the world (without China) plunged 27% to 52.1 Mt.

India’s production, normally the second largest in the world, collapsed 64% in April. US production, in fourth place, plunged 32%. China’s crude steel producers – many of them state-owned – are doing in this pandemic what they did during the Global Financial Crisis: They catapulted their global dominance to the next level. In April, they produced 62% of the world’s crude steel: 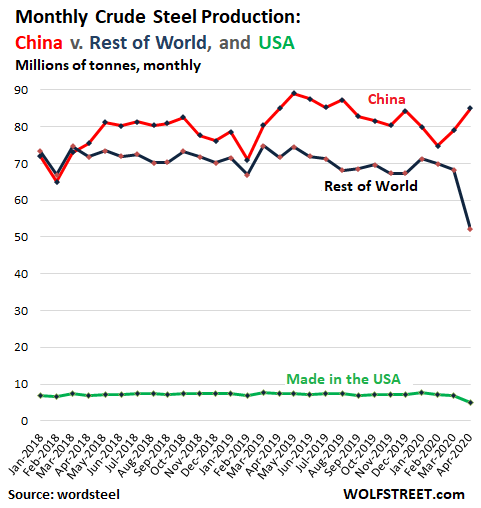 During this period, there have been only three episodes when annual crude steel production declined: the Asian Financial Crisis in 1998 (-2.7%); the Global Financial Crisis in 2009 (-7.8%); and in 2015 (-3.0%), when China, under pressure from skidding steel prices, made a short-lived effort to get money-losing overproduction at its steel makers under control: 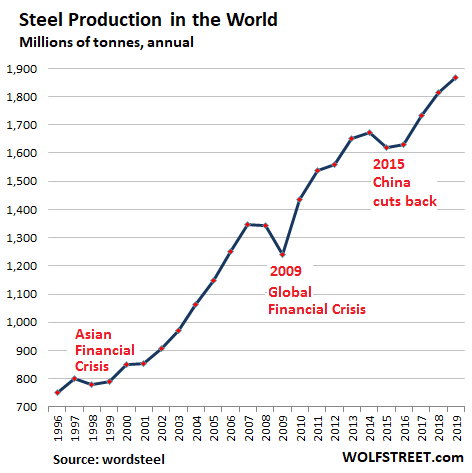 China’s steel giants, supported and often owned by various government entities, kept on producing crude steel during and after the Financial Crisis, even when there wasn’t enough global demand, causing prices to fall.

China’s market share dipped in 2008, during the Beijing Olympics, as some of the biggest steel producers and polluters were shut down to clear the air for global audiences. But then during the Global Financial Crisis, China just kept producing, and its market share of global crude steel production soared from 38% in 2008 to 46.6% in 2009.

In 2017, China outproduced for the first time the rest of the world combined. In 2018, it advanced its lead. 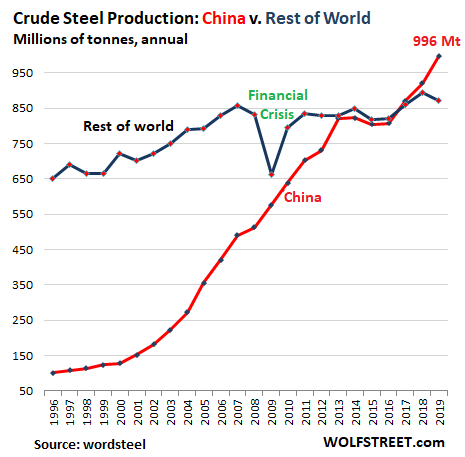 In 2001, China’s market share surpassed for the first time the market share of NAFTA (the US, Mexico, and Canada), and then look what happened: 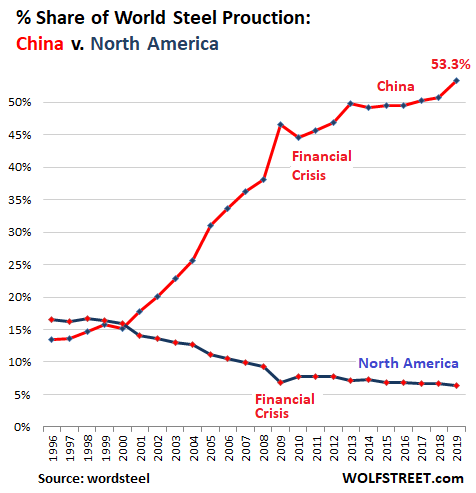 Among the top 20 producing countries, only three increased their share since 2017:

All other major producers, including top producers Japan, the US, Russia, South Korea, and Germany, lost market share in 2019 and 2018. 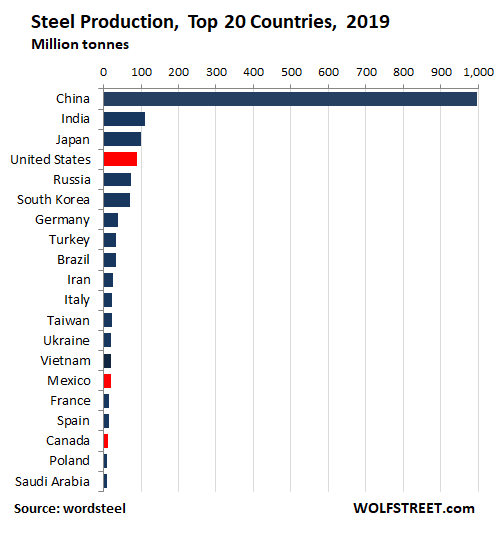 The 15 largest crude steel companies in the world in 2019

Eight of the 15 companies that produced the largest quantity of crude steel in 2019 are Chinese companies. Six of them are owned or controlled by government entities in China. The one US steelmaker on this list, Nucor, fell from 12th place in 2018 to 14th place in 2019.

There have been numerous international mergers in recent years, and production under one company can take place in various countries where the merged companies are located:

But it’s not like China is dumping crude steel on the global market.

China uses most of the crude steel it produces at its factories that convert it into finished steel products that are then either exported or used in China’s construction industry, including pipelines, and in its manufacturing industry to make components, motor vehicles, washing machines, towers of suspension bridges, etc., some of which are then exported as well (the tower of the new San Francisco-Oakland Bay Bridge and many steel components were made in China).

“The recovery is expected to be slow and uneven. It has not started quite yet based on the weak heavy-truck orders in May.” Read... This is What US Heavy-Truck Manufacturers Face After a 19-Month Order Collapse to Historic Lows