Loading...
Advertisements
First of all, it appears that Binance has reopened to new accounts without publicizing it (Binance Registration).  If you’ve been waiting to get in, please do so promptly as they could close it off again at any time.
WHERE DOES THE SELLING END?
Having broken through $10,000 this morning, as I type we’re now down to $9,200.
Yesterday I spotted two formations – one a Head & Shoulders that is targeting the low $8,000 range, and the other was a bearish pennant targeting the low $9,000 range which we’ve already hit.
So this morning I set about once again evaluating possible Elliott Wave counts and re-examining Fibonacci Retracement levels.
There’s really no support from here until about $8,200.  But when I look at what I now see as a potential E.W. count, I see that the descent can really be labeled as a very large ABC.  See chart below:

If this is what is happening, then when the length of C is equal to the length of A is the question.  That calculates right to the $7,800 mark.  A happy coincidence is that when I put Fibonacci retracement over the entire run up in BTC, a 61.8% retrace is right at $7,762.  I like to see targets in the same area calculated by more than one analysis technique.
So, I think the odds are now high that we do take the excursion down to $8,200 or lower, and that a bottom is likely around that $7,800 mark.  Should that area not hold, then the next area likely is in the $5,000 to $6,000 range.  But from what I see right now, I think odds favor a landing just below $8,000.
That said, if prices were to rise back above the $10,200 level, and stay there, then a bullish pattern could develop.  I am starting to see some bullish divergences, so let’s see what happens.
A GOOD ENTRY POINT IS COMING, or is here already, and really buying at these levels is a gift – thank you sociopathic world controllers!  When markets move like this there is great opportunity.  When markets behave like the 100% captured stock markets, there is little opportunity, mostly very high risk.
We know that the Crypto market is volatile, it has 50% corrections more than once per year!  It’s normal in markets that are new, especially when the establishment is doing everything in their power to choke it.  Again, their sociopathic controlling ways will fail to stop this – their monopoly on money has ended, they aren’t getting it back.
So I LAUGH at “professionals” like the new “Bond King” Gundlach, whose fortunes are tied to debt Dollars, slam those who see Bitcoin and other Cryptos as a more safe and sane alternative to the giant moral hazard created by them!
The next technical Analysis question to ask is what degree, or what wave was it that topped at just under $20,000?  Goldman Sachs technicians are labeling that as the top of wave 3 up.  That would mean this ABC is a wave 4, and that the next wave higher will be 5.
At this stage, I would probably not agree with that count.  Had that large triangle held in the sideways pattern, then it would be behaving like a wave 4.  But a retracement that exceeds 50% as this one has, and is likely to hit a 61.8% retracement is more likely to be a wave 2.  That means that large degree wave 1 up would have ended at $20,000, and it means the next up wave is an even more powerful wave 3.  That would match the trajectory of the numbers I see coming with Early Adopter Phase.
For those that missed my article, “Bitcoin and the Cryptocurrency Revolution – The Most Important Change of Your Lifetime, and Why it Will Spark Humanity’s Next Renaissance!”, here is the way I see the technology S curve and Innovation wave playing out for the Crypto industry: 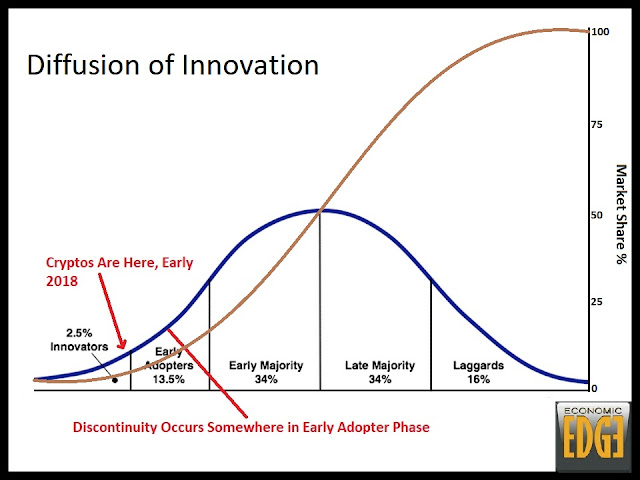 Bitcoin was founded in 2009, thus it has been 9 years for the Innovator wave.  But I think the waves accelerate in time from here since Crypto is software based, it resides on hardware that already exists.
If you project the growth path of Bitcoin and the number of users obtaining electronic wallets, then the Early Adopter phase could be as short as only 2 to 4 years in length!
That would mean that 30% of the population of the globe would own Cryptos by approximately the year 2020.  By 2022 the majority of the world will be transacting in one crypto form or another.  For this year, 2018, I expect more than 10% by the end of year, up from the 1.5 to 2.5% today.
Just look at Binance’s numbers!  Two million new subscribers per week.  That’s not the innovation phase, that says the tidal wave is coming.
We’re now retesting $10,000 from below.  If it were to regain it and hold, then we could easily label this morning’s low as the bottom of wave C.  But let’s see, we need to see strong buying come in for that to happen, otherwise I think we’re headed to $7,800.
If you haven’t sold already, then selling now is probably the exact wrong thing to do – remember, to make money, you want to buy when others are fearful, and sell when other are euphoric!
Nate

B of A: “Transitory” Inflation And Supply Chain Imbalances Are Hitting Autos Hardest

B of A: "Transitory" Inflation And Suppl