Loading...
Advertisements
Yesterday’s selloff ended at BTC $9,000.  This was an interesting place for it to end as there really was no support in that zone.  So what happened?
I think it’s very interesting that the bottom seemed to coincide with Binance’s reopening to new accounts – but it also coincided with yesterday’s expiration of the first month’s BTC Futures on Wall Street.  Note that BTC topped the day futures trading began, and has descended non-stop ever since.   Something changed yesterday – I think new money coming in was the biggest factor, and the Alts rose largely on this.
Another positive piece of news was the rising up of the South Korean people!  More than 210,000 people signed a petition demanding that their government stay out of their exchanges (the petition does allow for some regulation, but certainly not exchange closure).
How about that?  Again, the monopoly on money is over, people have had enough, and I believe that our collective conscious is now aware enough of the abuse that we’re not going to allow it to continue.  This backlash can be seen as countries are revolting against the Dollar, and people in general are losing faith in it, and in oversized gargantuan government.
These are BIG WAVES playing out around the world right now.  The Dollar index is falling dramatically.  Our broken government is on the verge of shutdown as politics and debt Dollar money are 100% intertwined.  The rise of Cryptos is humanity walking away from such nonsense. 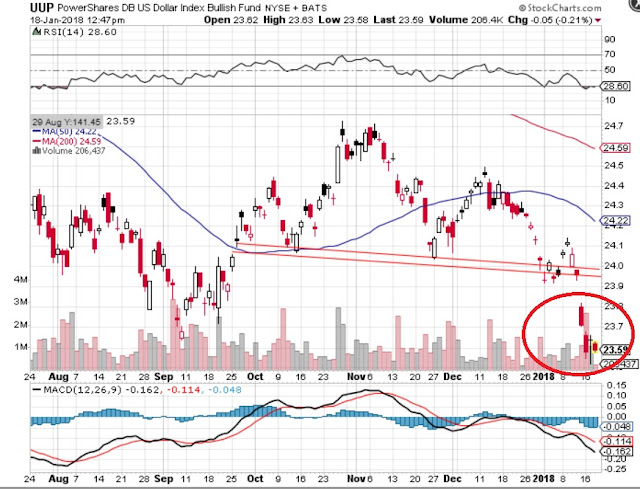 Importantly, the 10 year bond is breaking above the downtrend line established during the financial crisis of 2008: 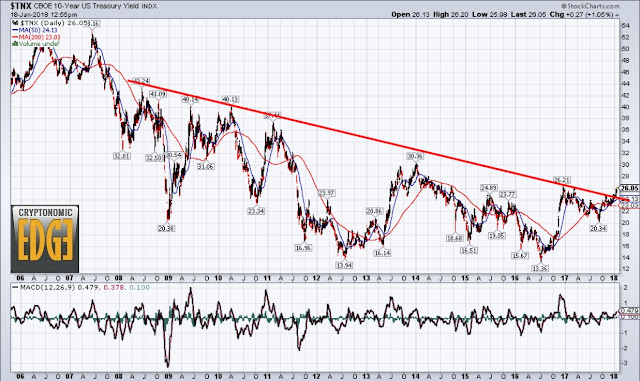 This is a very important thing!  As bonds go up in rates, they go down in value!  You don’t want to own bonds when rates are rising, you do want to own them when rates are falling.
So, if rates are going to rise further, then people are going to sell bonds.  When they sell, they temporarily convert them to Dollars.  Then what do they do with them?  If it were me, I’d buy Cryptos!  But keep in mind that these are mostly held by large banks (who would also be smart to be buying Cryptos).
These rate changes are the root of movement, they represent movement.  What occurs in Bonds ripples through to the stock market.  Money flowing into the markets as rates move higher (leaving bonds).  Money flowing into gold as rates move higher.  Money flowing into Cryptos as rates move higher.
But at some point rising rates run up against the impossible math of debt – debt saturation for individuals, for small business and for large corporations, for local, state, and federal governments.  All are saturated with debt.  The housing market in particular is built upon debt leverage – rising rates makes homes more expensive versus income.
So, you may wind up with a situation where stocks start to unwind the melt-up.  Money fleeing bonds, money fleeing stocks?  The logical recipient is gold and Cryptos.  But remember that as markets start to sink that most mainstream knuckleheads sell other assets first!  That’s because it’s their mission to exercise power and control over the globe – bonds, stocks, and debt Dollars is how they do it.
So don’t be surprised if other assets are sold first – but then a tidal wave of Dollars will flood into truly safe assets as those Dollars begin to seek safe haven – a place where they will be treated well, much better than in a bank.
But as the Dollar sinks and rises against the basket of other worth less and less money, I do think it’s in serious trouble mathematically.  Yes, the Dollar (in its current debt rendition) is dying. 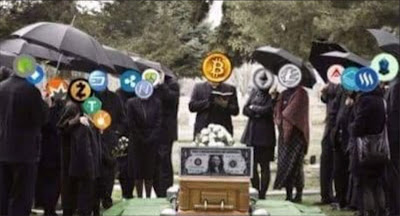 ARE CRYPTOS OUT OF THE WOODS?
Possibly, I’m cautiously optimistic.  They did rise sharply off the $9,000 bottom and did reach $12,000 this morning.  That’s a 30% rise off the bottom – huge for a one day move.  We now need to see prices stay above the $11,200 area, consolidate and then move higher.  If we slip below $11,200 on BTC, then we need to evaluate.
Here’s a big picture chart of BTC – I am tentatively labeling yesterday’s low as wave C:

Note that the formation now has taken on the appearance of a very large flag – this is known as a descending wedge.  Descending wedges are bullish.  This is a very large wedge, thus the price move out of it will also be very large.  Also note that the $13,800 area will likely coincide with the top of the wedge by the time prices arrive there.  That top of the wedge line will initially be resistance, but once broken, you need to be in for the rocket ride that follows!
Until that happens, it is also possible that the selling is not truly over.  Wedges can have several or even many touches – thus it’s possibly that prices bounce off both boundaries for a while.  That would mean that lower lows may come.  It’s also possible for prices to “spill out” of the mouth of a descending wedge – it is not a 100% of the time bullish formation, but it is the majority of the time.  It is most likely expected to play out something like this: 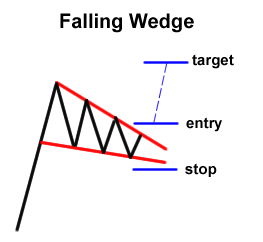 So if the correction was a simple ABC, then we may very well proceed to the top of the wedge and break higher without making another new low.  However, if the wedge extends in time, then we could continue to zig-zag, and may put in a lower low that touches the bottom boundary.
Bottom line is that we’re not entirely out of the woods until we break the upper descending downtrend line.  But I am seeing some bullish formations, inverse H&S patterns on a couple of different levels are possible.  But the fuel has to come, so we’ll see if they play out that way, or if prices lose momentum again.  A breather is expected as they’ve come a long way pretty quickly.
Best to your trading or Hodling strategy! (I played that bounce heavily and am happy to have gotten back into TRX at 4 cents!  My thinking is that as long as Binance remains open then the Alts should do better).
Nate