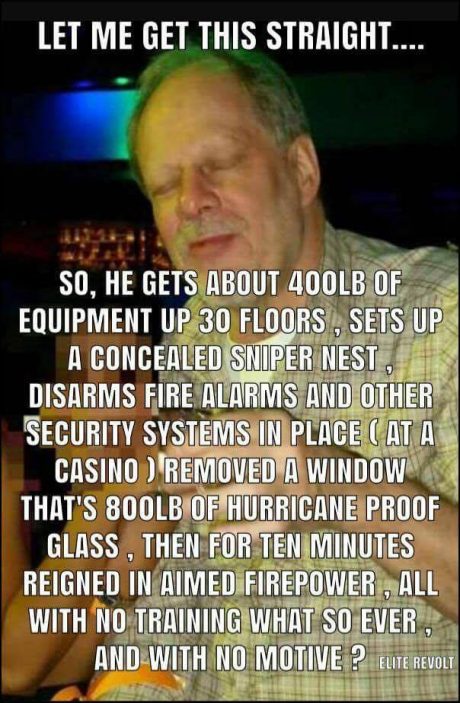 Forensic psychiatrist Dr. Michael Welner is convinced that Las Vegas shooter Stephen Paddock believed that the people that he was shooting “deserve to die”.  As I detailed the other day, the massacre in Las Vegas was an operation that was planned well in advance.  Paddock (and anyone that was helping him) specifically chose a country music festival as the target, and it is probably safe to assume that there was a reason for that choice.  Just think about it.  If someone decided to go start shooting at a black church, it would probably be safe to assume that individual is likely a racist.  Or if someone decided to shoot up a Jewish synagogue, it would probably be safe to assume that person is anti-Semitic.  And so why would someone want to gun down hundreds of people at a country music festival?  Well, it could be motivated by a great hatred for country music, but more likely it is because large numbers of conservatives, Christians and Trump supporters would be there.

Yes, it is possible that Paddock decided to commit mass homicide simply to make a name for himself.  But as Dr. Welner pointed out during an interview with Fox and Friends, that is usually something that only young men do…

Appearing on Fox and Friends, Welner explained that the massacre was a “stranger mass homicide,” which means that it was motivated either by a political or personal cause, or because the shooter wanted to gain notoriety, such as with Aurora shooter James Holmes, a case that Welner worked on.

“Here’s the thing, shooting for notoriety’s sake and nothing more is a young man’s crime and this is a 64-year-old with no dramatic mental illness,” said Welner, equating Paddock with James Hodgkinson, who attempted to massacre Republican lawmakers, which would have mandated special elections to replace them.

Instead, it is almost certain that Paddock was motivated by some sort of ideology.  According to Dr. Welner, this ideology made Paddock feel as though gunning down all of those innocent people was the right thing to do…

“His mindset is that they deserve to die,” said Welner, referring to the shooter, “So a person who adopts a cause may be otherwise law abiding but he feels righteously justified that the end justifies the means – so we’re talking now about gun control because he committed an over the top gun crime,” he added, suggesting that Paddock was “instigating a means to end with people you’ve dehumanized.”

Asked, “What do country music fans and country music artists represent?” Welner responded, “It’s Americana – it could be guns….he’s smart enough to know what this would instigate”.

Of course Paddock is far from an isolated case.  Sadly, there seems to be lots of leftists out there that are wishing great ill upon Trump supporters.  For example, not too long ago a blogger for the Huffington Post boldly declared that “Trump supporters deserve to die”…

The Huffington Post recently deleted a blog post in which the author fantasized about the deaths of Donald Trump supporters.

“Trump Supporters Deserve to Die More Than I Do,” wrote Chris Cali, an artist and musician who has contributed to the Huffington Post since 2014. The post has since been taken down, but survives in archive form.

And radical leftist groups such as Antifa are openly embracing violence.  Those belonging to such groups truly believe that Donald Trump is another Hitler, and therefore they believe that violence is absolutely necessary in order to keep the United States from becoming the next Nazi Germany.

Of course such talk is absolutely nuts, but this is what these people actually believe.  They actually believe that they are justified in using violence against Trump supporters for the greater good of society.  They see themselves as freedom fighters, and they consider people like us to be the root of everything that is wrong with our society.

So is there evidence that Paddock had been radicalized prior to the shooting?

According to Clark County Sheriff Joe Lombardo, that is something that authorities are looking into very closely…

During a live press conference, Clark County Sheriff Joe Lombardo revealed that the Las Vegas gunman, Stephen Paddock, may have been “radicalized” and that authorities were attempting to uncover the source of his radicalization.

“Did this person get radicalized unbeknownst to us? And we want to identify that source,” said Lombardo.

And of course evidence continues to emerge that Paddock did not act alone.  For instance, an Australian man that was staying in the room right next to Paddock told an Australian news source that there were “multiple shooters”…

Australian Brian Hodge, who previously worked at Jupiters Casino on the Gold Coast, claimed he was staying in the room next to the shooter on level 32 at the Las Vegas resort.

He said he managed to escape the initial horrific scenes inside the hotel but found himself forced to hide in a bush for several hours after the event.

“I got outside safely and was hiding in bushes,” Mr Hodge said.

“There were multiple people dead and multiple shooters. I was just hiding waiting for police to come get us.”

Before too long the Las Vegas shooting will start to get a lot less attention, but the truth is that this is just the beginning of the chaos that is coming to U.S. cities.

On November 4th, Antifa is launching their biggest campaign yet.  They are pledging to engage in disruptive protests all over the country until their demands are met.  And actually, they only have a single demand.  They are promising to never end the chaos until the Trump presidency ends.  And as the mainstream news has documented, members of Antifa are “unapologetic about what they describe as the necessary use of violence to combat authoritarianism”.

The radical left wants a “civil war”, and that country music festival was chosen as a target for a reason.

Let us pray for peace, but if the left gets their way we are headed for chaos unlike anything that we have ever seen before in modern American history.

Michael Snyder is a Republican candidate for Congress in Idaho’s First Congressional District, and you can learn how you can get involved in the campaign on his official website. His new book entitled “Living A Life That Really Matters” is available in paperback and for the Kindle on Amazon.com.

2 thoughts on “Did Las Vegas Shooter Stephen Paddock Believe That He Was Justified In Shooting Conservatives Because They ‘Deserve To Die’?”