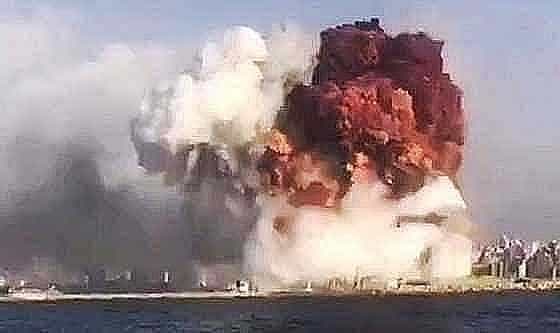 2020 just keeps getting weirder.  On Tuesday, an absolutely massive explosion caused a red mushroom cloud to rise high over the city of Beirut, Lebanon.  It is being called “Beirut’s Hiroshima”, and the blast was heard as far away as Cyprus.  You can watch a two minute compilation that contains video clips of the explosion from several different angles right here.  It appears that the shockwave did even more damage than the initial explosion did, and at this hour a large portion of the city of Beirut lies in ruins.  Dozens are dead, thousands are injured, and the entire city is now in a state of complete chaos…

The second blast sent an enormous orange fireball into the sky, flattened the harbourside and drove a tornado-like shockwave through the city, shattering windows kilometres (miles) away.

It is being reported that Beirut’s port “is totally destroyed”, and this comes at a really bad time because Lebanon is already in the midst of an epic economic collapse.

In recent months, we have become accustomed to hearing about “mystery explosions” all over the Middle East, and many believe that those mystery explosions indicate that the region is on the brink of a full-blown war.

But this incident was different.  A large section of the capital of Lebanon has been flattened, and many eyewitnesses are comparing the blast to a nuclear explosion.  Here is one example…

“It was like an atomic bomb,” said Makrouhie Yerganian, a retired schoolteacher in her mid-70s who has lived near the port for decades.

“I’ve experienced everything, but nothing like this before,” even during the country’s 1975-1990 civil war, she said. “All the buildings around here have collapsed.”

“This reminds me of what happened in Hiroshima and Nagasaki,” said Beirut Governor Marwan Aboud. “I have never seen such widespread destruction. This is a national catastrophe. This is a disaster for Lebanon. We’re already living through days where we can barely keep going.”

“And now this…I don’t know how we’re going to recover from this,” Aboud told Sky News, before bursting into tears.

Immediately after this happened, a lot of people began wondering if this was an Israeli attack, but that does not appear to be the case.

One unnamed Israeli government official told AFP that “Israel had nothing to do with the incident”, and Benny Gantz has actually offered to send humanitarian aid to Beirut…

Offers of aid also came from bitter rivals Israel, with which it is still technically at war. Defense Minister Benny Gantz and Foreign Minister Gabi Ashkenazi, on behalf of the State of Israel, have offered the Lebanese government – via international intermediaries – medical and humanitarian aid, as well as immediate emergency assistance,’ said a joint statement from the two ministries.

If Israel really had been behind this attack, I seriously doubt that they would be offering to patch up their enemies.

And this isn’t Israel’s style either.  The Israelis prefer surgical strikes that avoid civilian casualties as much as possible, and this explosion definitely does not fit that profile.

Instead, it appears that this was some sort of deeply tragic accident.  Lebanese officials have admitted that 2,700 tons of ammonium nitrate were stored in the unit that exploded, and that amount of ammonium nitrate can definitely produce the sort of explosion that we just witnessed…

Lebanon’s interior minister said ammonium nitrate had been stored in the unit since 2014, with experts agreeing that the chemical would cause the red plume of smoke which burst up from the blast.

Local media are reporting that 2,700 tonnes of the chemical exploded, which scientists making initial calculations said was about three kilotonnes of TNT – roughly a fifth of the Little Boy atomic bomb dropped on Hiroshima in the Second World War.

But Donald Trump is apparently not buying that explanation.  He told the press that the explosion “was an attack” and that it was caused by “a bomb of some kind”…

At least 60 people were killed and thousands were wounded in an explosion that caused widespread damage in the Lebanese capital. Trump said he had been briefed by “our great generals” and that they “seem to feel” that the explosion was not an accident.

“According to them – they would know better than I would – but they seem to think it was an attack,” Trump told reporters at the White House. “It was a bomb of some kind.”

If this really was an attack, the Lebanese are going to want revenge, because a substantial portion of their capital city has been absolutely decimated.

And needless to say, there are already voices all over the Middle East that are eagerly pointing a finger of blame at Israel and are calling for war.

But unlike the “mystery explosions” that have been happening in Iran, the evidence does not indicate that Israel had anything to do with this great tragedy.

Unfortunately, a lot of people out there are going to jump to their own conclusions, and many of those that hate Israel will use this as another justification to call for armed conflict.

Over the past couple of years, there have been so many moments when it seemed like a major war could break out at any time in the Middle East.  And here in 2020, tensions are running higher than ever.  The IDF has been regularly hitting Iranian and Hezbollah targets all over the region, and we just witnessed a harrowing confrontation on the Syrian border.

It appears that it is just a matter of time before a huge war erupts in the Middle East, and it certainly isn’t going to take much to trigger one.

So could this explosion push the region over the edge?

Let us hope not, but without a doubt this blast is not going to help matters.

***It is finally here! Michael’s new book entitled “Lost Prophecies Of The Future Of America” is now available in paperback and for the Kindle on Amazon.com.***

About the Author: My name is Michael Snyder and my brand new book entitled “Lost Prophecies Of The Future Of America” is now available on Amazon.com.  By purchasing the book you help to support the work that my wife and I are doing, and by giving it to others you help to multiply the impact that we are having on people all over the globe.  I have published thousands of articles on The Economic Collapse Blog, End Of The American Dream and The Most Important News, and the articles that I publish on those sites are republished on dozens of other prominent websites all over the globe.  I always freely and happily allow others to republish my articles on their own websites, but I also ask that they include this “About the Author” section with each article.  In addition to my new book, I have written four others that are available on Amazon.com including The Beginning Of The End, Get Prepared Now, and Living A Life That Really Matters. (#CommissionsEarned)  The material contained in this article is for general information purposes only, and readers should consult licensed professionals before making any legal, business, financial or health decisions.  I encourage you to follow me on social media on Facebook and Twitter, and any way that you can share these articles with others is a great help.  During these very challenging times, people will need hope more than ever before, and it is our goal to share the gospel of Jesus Christ with as many people as we possibly can.

The post Did The “Mushroom Cloud” Explosion In Beirut Just Push The Middle East Closer To A Major War? appeared first on The Economic Collapse.

White House Reporters Have Launched 'For

Here Are All Of Evergrande's Debt Paymen

When Will “Transitory Inflation” Overstay Its Welcome?

When Will "Transitory Inflation" Oversta