Authored by MN Gordon via EconomicPrism.com,

Up until the WallStreetBets crowd short squeezed Melvin Capital for a $7 billion loss, Robinhood had it made.  But losing billions is stressful.  And when your product blows up your customer the clucking that follows comes hot and heavy.

One of the sweetest displays in the world, we’ve been told, is the bursts of digital confetti that shower down Robinhood’s investment app to celebrate the purchase of stocks, options, and cryptocurrencies.  These digital confetti bursts – in addition to spinning prices and scratch off rewards – are great entertainment.  So, too, is watching the price of bitcoin quoted in neon pink.  It just screams buy!

Trading on Robinhood is designed to be both fun and exciting.  There are even freebie alerts.  It’s like playing Candy Crush.  Only the score is kept in dollars and cents.  And with a little practice you can strike it rich.

The clucking for Robinhood CEO, Vlad Tenev, began on Thursday, January 28, at 3:30 am Pacific Time.  That’s when the National Securities Clearing Corporation (NSCC) informed his company that it had to put up $3 billion.  According to Tenev, that’s “an order of magnitude more than what it typically is.”

But Tenev and the fellows at the NSCC handled the situation like professionals.  After several early morning phone calls they came to a nifty agreement…

Robinhood would provide $700 million.  In lieu of the remaining funds, the company would restrict buying – and digital confetti bursts – of the WallStreetBets-fueled rocket launch of GameStop, AMC, and several other heavily shorted stocks.  That’s when the clucking really began.

The promise of something for free will always be an enticing marketing ploy.  Years ago, for example, when opening a new bank account at your local thrift, they’d kick in a free toaster.  Robinhood took this marketing strategy and adapted it to the digital age.

The free stocks are selected at random.  If you’re lucky, you’ll score a share of Apple or Visa.

These free promotions are fun…and generally harmless.  Moreover, there are worse ways to acquire new customers.  If Robinhood wants to sprinkle free stock around, like digital confetti bursts, good for them.

Yet everyone knows Robinhood’s ultimate freebie is its commission free trades.  Certainly, this goes counter to how brokerages have traditionally conducted business.  Hence, this ultimate freebie comes with the ultimate catch.

On January 28, after Tenev’s early morning fireside chat with the NSCC, and after WallStreetBets had delivered a three day beat down to Melvin Capital, this ultimate catch was revealed with exacting clarity.  By restricting buying at this critical moment, Robinhood appeared to be making an explicit choice: Hedge funds over customers.

And therein lies the kicker: The hedge funds are Robinhood’s customers; its users are the product.

During the late stages of an epic bubble, fraud, folderol, grift, and graft, drip like honey from a mistresses lips.

Was this an act of fraternal benevolence?  Maybe.

But a day or two later Robinhood restricted its users from buying the very stock – GameStop – that wrecked Melvin Capital.  Is it merely a coincidence that Citadel is also Robinhood’s biggest customer?

You see, Robinhood, which offers commission free trades, makes its money by selling users’ trades to other large firms – like Citadel Securities – before they’re actually executed.  Those firms make money by effectively seeing what the retail investors on Robinhood are going to do before they actually do it, and acting accordingly.  The Financial Times explains:

“Citadel Securities pays tens of millions of dollars for this order flow but makes money by automatically taking the other side of the order, then returning to the market to flip the trade.  It pockets the difference between the price to buy and sell, known as the spread.”

If this skimming activity sounds like a rigged market it’s because it is.  What’s more, it’s making certain insiders ridiculously rich.

Did You Make Janet Yellen Rich?

Incoming Treasury Secretary Janet Yellen, who was Chair of the Federal Reserve from 2014 to 2018, is an insider’s insider.  During her brief hiatus from public life Yellen went on a spectacular speaking tour of the big Wall Street banks and corporations.

In total, she raked in $7.2 million in speaking fees from places like Citi, Goldman Sachs, Google, City National Bank, UBS, Barclays, Credit Suisse, Salesforce, and more.  Not bad work, if you can get it.

But what could she have possibly said that was so valuable?  Did she prove the existence of perpetual motion?  Did she, in fact, square the circle? 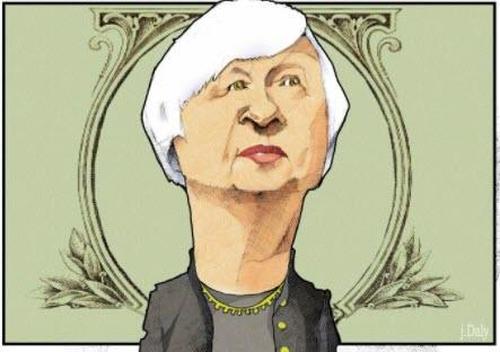 For an insider’s insider, speeches are delivered with unspoken symbiosis.  The words uttered have little relevance.  The fees, however, lubricate the mechanism of future access.  It wasn’t much of a gamble to bet that Yellen would be Treasury Secretary under a Biden presidency.

Another one of the firms Yellen spoke at happened to be Citadel – Robinhood’s biggest customer.  She got $810,000 for two speeches and a series of webinars.

Now where did Citadel get the money to pay Yellen?

Obviously, the company funded it via business profits.  But, remember, some of those profits came from skimming retail investor order flow purchased from Robinhood.  From what we gather, Schwab, TD Ameritrade, and other online brokers also sell order flow to Citadel.

Thus, if you’ve made a trade over the last three years using an online brokerage, guess what?

The cluckers in Congress have vowed to get to the bottom of the hullaballoo.  Somehow this will all be WallStreetBets’ fault…and the insiders – once again – will get off scot free.