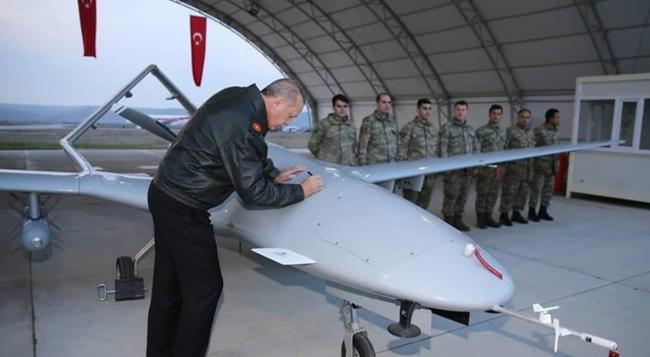 First, a large Turkish military drone was downed over south Idlib on Tuesday. The Syrian Arab News Agency (SANA) reported, “A unit of the army shot down a drone for the Turkish regime forces in the Dadekh region in the southeastern countryside of Idlib.”

A large Turkish drone was downed by the Syrian Army Tuesday in south Idlib countryside:

Hours later, pro-Haftar forces in Libya announced they had shot down a Turkish aircraft which took off from Mitiga International Airport in Tripoli, and also published video of the crash site.

A second Turkish UAV #TB2 was shot down in 24 hours by #LNA airdefense missile in the vicinity of Souk Al-Khamis, south of the capital #Tripoli. #Libya. pic.twitter.com/GxkpVfjk8v

Pro-LNA media accounts used the opportunity to mock the Turkish military, which has had a deepening presence in Libya defending the Tripoli Government of National Accord (GNA).

“The short life of a Turkish UAV. The worst record ever of any UAV in military history,” one prominent LNA military account said, accompanied by a prior file photo of Turkish President Recep Tayyip Erdoğan writing his signature on a multi-million dollar drone similar to the type that was downed.

A photoshopped image of Erdogan kneeling down to “sign” the newly crashed drone was placed by the original photo in the social media post.

The short life of a Turkish UAV .
The worst record ever of any UAV in military history.#TB2 #Erdogan #LNA #Libya pic.twitter.com/AyBdV7R25D

This comes as Turkey is suffering mounting troop loses in both Idlib and Libya. In rare statements Erdogan admitted to reporters Tuesday,  “We have two martyrs there in Libya.”

However, international reports suggest the true death toll could be much higher, with Haftar’s LNA claiming at least 16 Turkish soldiers have been killed in fighting.

A horrific speech by #Erdogan in which he vows to revive the Ottoman Empire and occupy a large swath of territories extending from Libya to Crimea. #Syria #Idlib
Support me through Patreon:https://t.co/T1cOLTuupQ pic.twitter.com/jUt6FMzwrS

Turkish casualties have been mounting in Syria’s Idlib as well. Though numbers are disputed, Turkish media has cited at least a dozen killed.

Meanwhile, on Wednesday Erdogan issued Syrian and Russian forces another threat and ultimatum. “We will not step back in Idlib. We are not the guests in this realm, we are the hosts,” he told a meeting of his AK party on Wednesday.

Amid prior threats to ramp up Turkish military presence in the northwest Syrian province, which pro-Assad forces are attempting to recapture from al-Qaeda factions which have for years occupied the region, Erdogan said Assad forces have until “the end of the month” to pull out.