Authored by Nicholas LePan via VisualCapitalist.com,

Just like in life, markets go through peaks and valleys. The good news for investors is that often the peaks ascend to far greater heights than the depths of the valleys.

Today’s post helps to put recessions into perspective. It draws information from Capital Group to break down the frequency of economic expansions and recessions in modern U.S. history, while also showing their typical impact.

What is a Recession?

According to the National Bureau of Economic Research, a recession can be described as a significant decline in economic activity over an extended period of time, typically several months.

In the average recession, gross domestic product (GDP) is not the only thing shrinking—incomes, employment, industrial production, and retail sales tend to shrink as well. Economists generally consider two consecutive quarters of declining GDP as a recession.

The general economic model of a recession is that when unemployment rises, consumers are more likely to save than spend. This places pressure on businesses that rely on consumers’ income. As a result, company earnings and stock prices decline, which can fuel a negative cycle of economic decline and negative expectations of returns.

How Long Do Recessions Last?

Recessions generally do not last very long. According to Capital Group’s analysis of 10 cycles since 1950, the average length of a recession is 11 months, although they have ranged from eight to 18 months over the period of analysis. 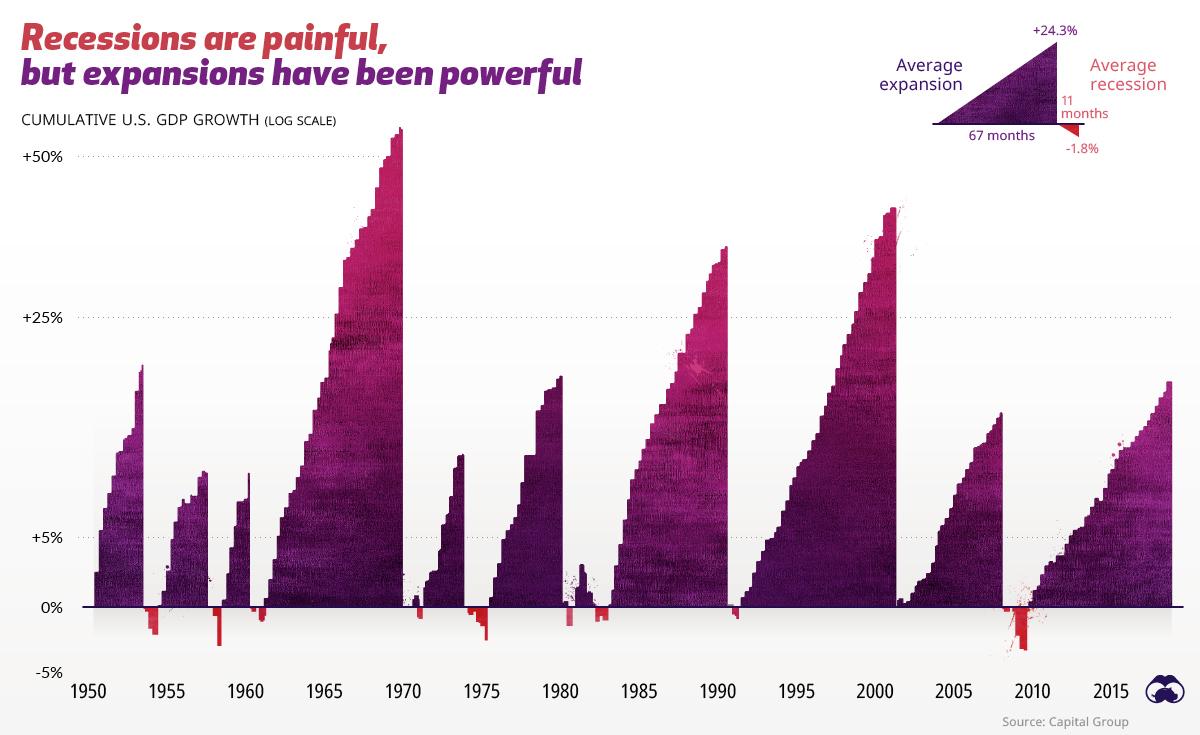 Jobs losses and business closures are dramatic in the short term, though equity investments in the stock market have generally fared better. Throughout the history of economics, recessions have been relatively small blips.

Over the last 65 years, the U.S. has been in an official recession for less than 15% of all months. In addition, the overall economic impact of most recessions is relatively small. The average expansion increased GDP by 24%, whereas the average recession decreased GDP by less than 2%.

In fact, equity returns can be positive throughout a contraction, since some of the strongest stock rallies have occurred in the later stages of a recession.

Whether you are an investor or not, it would be wise to pay attention to potential recessions and prepare accordingly.

There are several indicators that people can watch to anticipate a potential recession, which might give them an edge in preparing their portfolios:

This is not a magic rubric for anticipating every economic downturn, but it helps individuals see the weather patterns on the horizon. Whether and where the storm hits is another question.