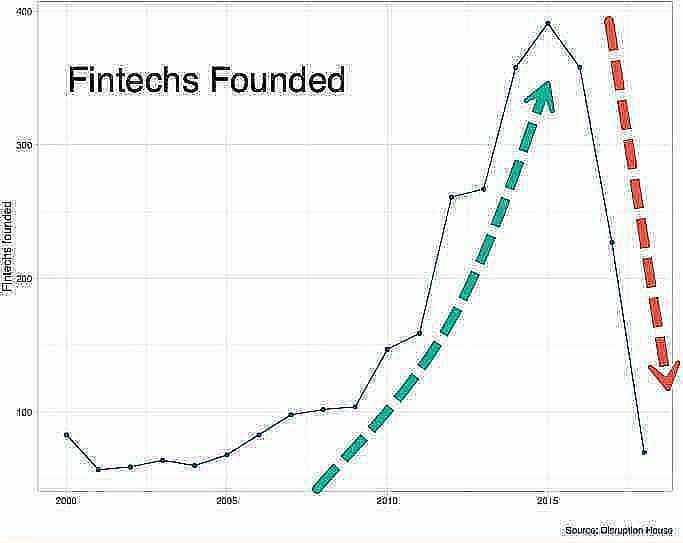 Fintech Bubble Implodes And Nobody Even Noticed

Venture capitalists have poured billions of dollars into fintech unicorns, otherwise known as digital bank startups over the last decade. The biggest question everyone is asking is whether the fintech bubble has already burst.

Taking a look at the fintech mania, Ian Green, principal consultant for data and technology at The Disruption House, has provided the Financial Times with a chart of benchmarking and data analytics of the sector. 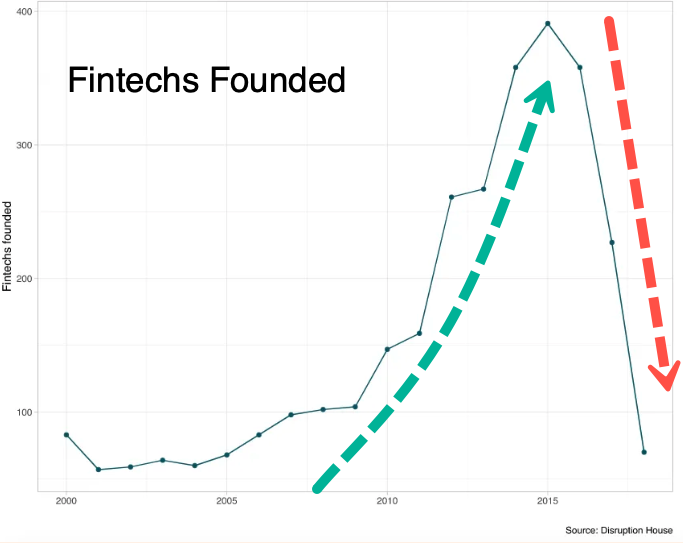 Green said the data series is incomplete for 2019 but will likely show the continuation of the trend lower. He said the number of fintech startups founded this year was only 12 versus 390 in 2015.

Green wrote a piece on Risk.net titled The end of the fintech gold rush?, in which he described why so many fintech startups have recently failed:

“The post-crisis boom years were a period of punctuated equilibrium in the evolution of software. In a rapidly changing environment, a large number of experimental forms emerged with exceptional speed. Most of these died out quickly as the pace of change in the banking landscape reverted to stasis. The mechanism causing most of the new firms to fail, and eventually checking the creation of further startups, could theoretically be the occupation of every new niche by the most successful of the new firms. But it doesn’t feel like that – or, at least, not just that. Rather, the environment in which the plethora of startups hoped to thrive proved intrinsically hostile to new life forms.

There is another hurdle beyond the sales cycle for fintechs that target banks as clients: the difficulty that banks have in integrating anyone else’s software. As Access Fintech’s Saadon observes, “fintechs see the $100,000 of value they can bring to a bank, but not the bank’s $1 million cost of change”. The exceptional riskiness and high cost of adoption is partly due to the massive accumulation of interconnected software that comprises a bank’s in-house stack. As far as IT goes, banks are enmeshed in their own history.”

FT makes an intriguing point that the “problem for fintechs is that anything they can do; traditional banks can copy, and can throw more resources at.”

And with that being said, it seems that another bubble has imploded, and barely anyone has noticed.

Though when it comes to Silicon Valley unicorns heading to the public markets this year, it has been an absolute disaster as the tide has gone out for companies who don’t make money ahead of the next recession.