With so many problems and issues plaguing America here in 2018, one has to ask a rather curious question following the announcement by Supreme Court Justice Anthony Kennedy of his pending retirement… why are so many Democrats going absolutely nuts over the fear that the next Justice could overturn the right for women to have an abortion?

The answer to this lies in the fact that the 1972 Roe v. Wade ruling is extraordinarily tenuous.  By this I mean that the right to abortion is not a Constitutional right, nor is it a law enacted by the legislature.  No the right for women to solely decide on the outcome of their reproductive process is based simply on the opinions and decisions of Justices 40 years ago at a time when America was on fire with activism and civil rights fervor. 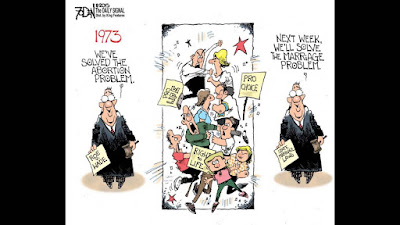 In any and every society, the pendulum swings back and forth over time from liberalism to conservatism, from morality to anarchy, and of course, back again the opposite way.  During the 1950’s America was a strongly religious and moralistic society that one decade later turned into one of extreme radicalism and change.  Additionally, the 1980’s, 90’s, and 2000’s were one of greed and materialism only to be followed after the 2008 Financial crisis by one where the rich are vilified, and the millennial generation is decidedly non-materialistic.

The Democrats in Congress are desperate to try to cowtow President Trump into appointing a moderate or even liberal Justice to the Supreme Court to protect their monopoly of liberal rulings.  And perhaps most interestingly, some are using the straw man of demanding the next judge rely primarily on precedent rather than the Constitution itself in deciding cases.

In a speech on the Senate floor shortly after Supreme Court Justice Anthony Kennedy announced that he was retiring, Schumer said, “The Senate should reject on a bipartisan basis any justice who would overturn Roe v. Wade, undermine key healthcare protections.” Schumer said. – WDEZ

The irony of course is that if Supreme Court Justices relied solely on precedent, then blacks in America would still be under Jim Crow laws in some areas since the right to separate but equal came from a Supreme Court ruling on the issue back in 1896 via Plessy v. Ferguson.

Plessy v. Ferguson, 163 U.S. 537 (1896), was a landmark decision of the U.S. Supreme Court issued in 1896. It upheld the constitutionality of racial segregation laws for public facilities as long as the segregated facilities were equal in quality – a doctrine that came to be known as “separate but equal“.

Yet because the Supreme Court in the 1950’s saw that separate but equal was not legal under the Constitution, the Justices overturned Plessy v. Ferguson in their landmark Brown v. Board of Education ruling which made discrimination through color or race illegal.

It has been estimated that ever since Roe v. Wade was passed 46 years ago, over 60 million American children have been aborted in the womb, and primarily because of convenience versus any potential health issue to the mother.  And with much of the industrialized world undergoing a radical change where birth rates in Europe, Russia, Japan, and even the United States have dropped below replacement levels, the fact that abortion on demand has become easy due to the opinions of a single court back 40 years ago that a woman could hold the power over life and death in regards to the natural cycle of reproduction has inevitably created a scenario here in the 21st century that could see the end of one or more civilizations as we know it if it is allowed to continue.
Source: thedailyeconomist.com