If you don’t discern any of these dynamics in the present, what are you choosing not to see? 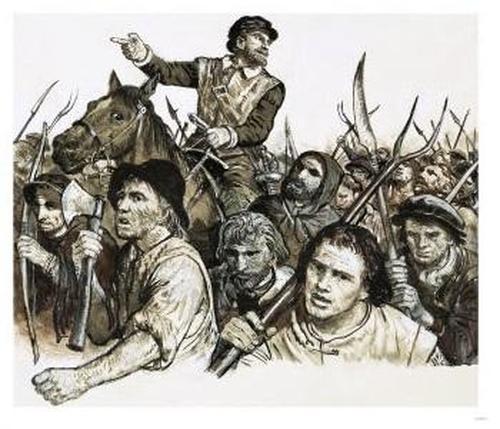 The reason why history rhymes is that humanity is still using Wetware 1.0 and so humans respond to scarcity, abundance and conflicts over them in the same manner.

I am struck by similarities between the conflict-torn mid-1600s and the present: global climate change (The Little Ice Age in the 1600s), political upheavals and wars which intertwined civil and imperial conflicts. Global Crisis: War, Climate Change and Catastrophe in the 17th Century is a fascinating overview of this complex era which disrupted regimes and empires from England to China.

Climate change (The Little Ice Age) generated scarcities of grain in a time of burgeoning human populations. As in the present day, everyone assumed ample harvests would continue forever–expanding abundance is the New Normal. Alas, Nature is not a steady-state system and cycles are not tamed by our desire for ever-expanding abundance.

Humans respond to scarcity by assessing who’s getting the biggest pieces of the shrinking pie. When hunger begets desperation, various dynamics are set into motion as those without agency and capital, i.e. political and financial power do whatever they can to get enough to survive while those holding the majority of political and financial power, jockey to maintain or expand their power.

These dynamics are fluid and prone to non-linear flows in which relatively small actions unleash enormous consequences that are not predictable. If we squint, however, we can discern some repeating patterns in this chaotic swirl:

1. Private owners of capital (i.e. elites) seek to influence the state to protect / expand their holdings.

2. The dispossessed / disenfranchised masses seek redress / succor from the state.

3. The geopolitical balance of power becomes increasingly precarious as competition for control of resources and political power heats up.

4. The state’s resources are diminished by famine, decline of trade, etc. as pressures from geopolitical rivals, elites and the masses are spiking, reducing the state’s ability to respond to the multiple challenges / overlapping crises.

5. The overlapping crises reveal and exploit the weaknesses in the political, social and economic structures, and in the competing elites.

6. Leaders concentrate centralized power in the hands of the few as a coping strategy by reducing the influence of broad-based councils, assemblies, etc. This concentration of power at the expense of the many (including lower-level elites who were accustomed to holding some consequential power) increases resistance of those being cut out of the decision-making and increases the odds of catastrophic errors of judgment in the few at the top.

7. As the state falters or divides into warring factions, the most powerful elites take control of resources and power from the state, both as a defensive measure and as a means of exploiting the crisis to their own advantage.

8. Populist leaders arise demanding a fairer distribution of resources and power. The more repressed the masses, the greater the disorder created by this emergence of long-silenced voices.

9. Each node seeking to defend or expand its share of resources and power projects and amplifies persuasive rhetoric, symbols and beliefs to unify its supporters around deeply held values and aspirations.

11. In this fevered competition for loyalty and trustworthy followers willing to sacrifice for the faction, leaders view every advance as evidence that compromise is unnecessary as total victory awaits the next “win.”

12. Given the grievous losses and potentially devastating consequences of competing factions gaining ground, the victors of each battle hasten to take revenge on the losing faction, laying waste and inflicting cruelties that harden the hearts of the surviving losers and inciting their own determination to exact a full measure of revenge when fortunes turn their way.

13. Only when the land, people and treasure are all exhausted does the promise of total victory fade, and the factions seek some negotiated settlement that leaves whatever power they still have intact lest they lose everything.

14. The eventual settlement could have been reached in the initial stages of disorder, but the leaders of the factions were too myopic, too confident in their own judgment and power, too greedy for more and too hubris-soaked to appreciate their own weaknesses and the immense pitfalls ahead.

If you don’t discern any of these dynamics in the present, what are you choosing not to see?

Will You Be Richer or Poorer?: Profit, Power, and AI in a Traumatized World (Kindle $5, print $10, audiobook) Read the first section for free (PDF).

The Adventures of the Consulting Philosopher: The Disappearance of Drake $1.29 (Kindle), $8.95 (print); read the first chapters for free (PDF)