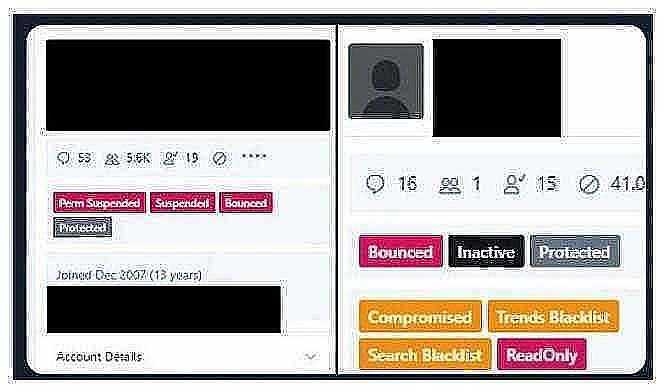 Is Twitter Hiding A Screenshot Of Its Trend And Search Blacklist Tools?

For the full details on the hack, you can read our report on it here.

But now, an even more sinister subplot is emerging from the ruins of Twitter’s reputation.

Sources that are “close to or inside” the underground hacking community have leaked a screenshot of what is allegedly an internal software panel used by Twitter to interact with user accounts, according to a late Wednesday night report from Vice.

The tool is said to be used to help change ownership of popular accounts and, in the case of the hack, was said to play a role in usurping the high profile accounts involved. Here is a photo of the panel, with portions redacted by the leaker of the photo to Motherboard.

The interesting thing is that screenshots of the supposed internal software are being aggressively pursued and deleted from Twitter by Twitter itself, with the company claiming that they violate the platform’s rules. In addition to being posted to Motherboard and Twitter, a similar image also appeared on a now deleted Tweet controlled by “Under the Breach”. They have since said their account has been suspended for 12 hours as a result of them posting it.

Of particular interest are the buttons labeled “SEARCH BLACKLIST” and “TRENDS BLACKLIST”. Could these be tools actively used by Twitter to censor what Tweets and topics appear during searches and on its trends page?

In other words, could this be the holy grail that all those who have accused Twitter over the years of shadowbanning conservative accounts, have been looking for?

“As per our rules, we’re taking action on any private, personal information shared in Tweets,” Twitter told Motherboard in response to inquiries about the screenshot, and its deletion or suspension of any account that posted it. .

While we cannot confirm independently that the screenshot is, in fact, from Twitter’s development/moderator tools, it certainly would open up a whole new can of worms regarding the hack if it turns out to be.

Once people are done asking how this unprecedented hack could have happened in the first place, we wouldn’t be surprised if attention turns to how these moderation tools, if they truly exist, are being implemented.