There was a time when the merest mention of gold manipulation in “reputable” media was enough to have one branded a perpetual conspiracy theorist with a tinfoil farm out back. That was roughly coincident with a time when Libor, FX, mortgage, and bond market manipulation was also considered unthinkable, when High Frequency Traders were believed to “provide liquidity”, when the stock market was said to not be manipulated by the Fed, and when the ever-confused media, always eager to take “complicated” financial concepts at the face value set by a self-serving establishment, never dared to question anything.

All that changed last November when a former JPMorgan precious-metals trader admitted he engaged in a six-year spoofing scheme that defrauded investors in gold, silver, platinum, and palladium futures contracts. John Edmonds, then 36, pled guilty under seal in the District of Connecticut to commodities fraud, conspiracy to commit wire fraud, commodities price manipulation, and spoofing. As FBI Assistant Director in Charge Sweeney explained that “with his guilty plea, Edmonds admitted he intended to introduce materially false and misleading information into the commodities markets.”

“The Criminal Division is committed to prosecuting those who undermine the investing public’s trust in the integrity of our commodities markets through spoofing or any other illegal conduct.”

“By conspiring with his trading partners to place spoof orders, he blatantly attempted to profit off of an unfair market that he helped create.  The FBI will continue to work with our partners to insure financial markets remain a level playing field for all investors.”

Then, one month ago, Corey Flaum, who worked as a trader at Bear Stearns and Bank of Nova Scotia, also admitted to precious metals manipulation, saying he placed thousands of bogus orders for futures contracts over a nine-year period.

Christiaan Trunz, another former JPMorgan metals trader, pleaded guilty on Tuesday to conspiracy and to manipulating prices in the precious-metals market as part of the U.S. government’s continuing crackdown on bogus spoofing trades.

Trunz, 34, admitted during a hearing in federal court in Brooklyn, New York, that he also used spoofing to manipulate precious metal prices and to extract a profit while he worked at Bear Stearns and at JPMorgan between 2007 to 2016. He pleaded guilty to in connection with a specific spoofing incident in June 2016.

While Trunz could face a maximum prison term of as long as 135 months when U.S. District Judge Pamela Chen sentences him in February, he will likely get away with a fine and a warning never to rig the precious metals market again.

As we discussed last November, this is how Edmonds and his fellow precious metals traders at the Bank – one of whom would turn out to be Trunz – spoofed the market :

This trading strategy was admittedly intended to inject materially false and misleading liquidity and price information into the precious metals futures contracts markets by placing the Spoof Orders in order to deceive other market participants about the existence of supply and demand.

The Spoof Orders were designed to artificially move the price of precious metals futures contracts in a direction that was favorable to Edmonds and his co-conspirators at the Bank, to the detriment of other market participants.

In pleading guilty, Edmonds admitted that he learned this deceptive trading strategy from more senior traders at the Bank, and he personally deployed this strategy hundreds of times with the knowledge and consent of his immediate supervisors.

Justice describes one such ‘spoof’ that occurred on October 12, 2012

“Edmonds knowingly executed the scheme and artifice by transmitting and causing to be transmitted to a CME Group server an offer to sell approximately 402 silver futures contracts (“Spoof Order”), with the intent, at the time the offer was entered, to cancel the offer before it could be executed, which fraudulently represented the state of the market, so that Edmonds could purchase approximately 6 silver futures contracts at a below-market price.

Edmond’s ‘Spoof Order’ caused other market participants to react and trade at prices, quantities, and times at which they otherwise would not have traded, but for EDMONDS’s Spoof Order.” 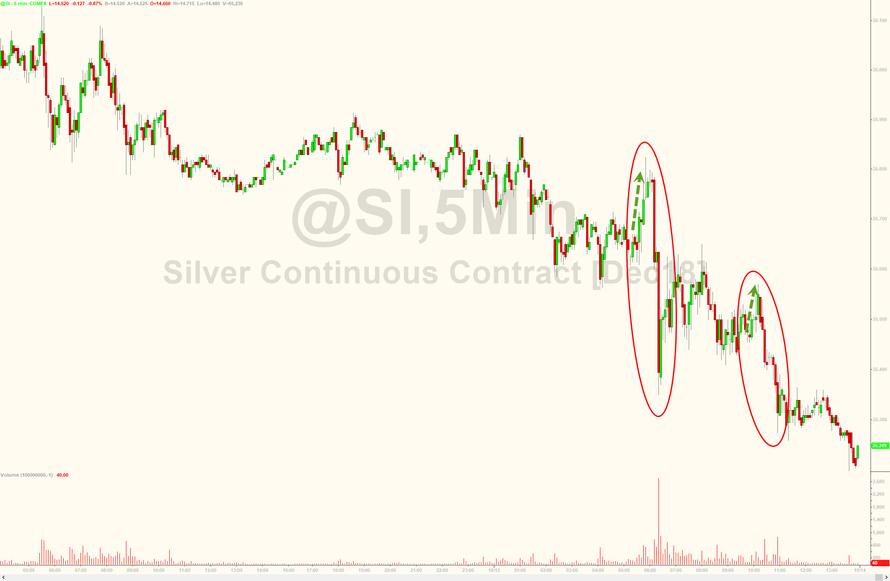 It’s not like ‘manipulation’ ever stopped however – one glance at the ‘odd’ price action almost every day around the time of the London Fix makes it clear, it is anything but a ‘normal’ market: 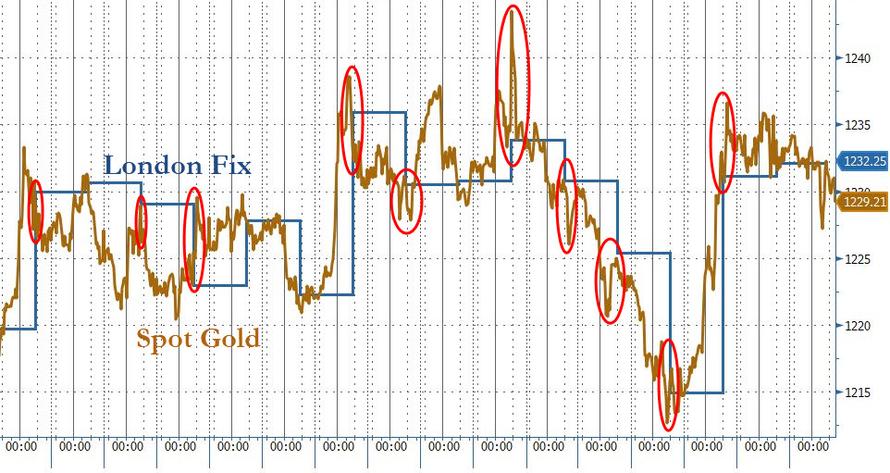 We’ll give  U.S. Attorney Durham the last word (bearing the chart above in mind):

“The investigation of deceptive trading practices by others involved in this scheme is ongoing.”

The DoJ ends its statement with the following: “Individuals who believe that they may be a victim in these cases should visit the Fraud Section’s Victim Witness website for more information. “