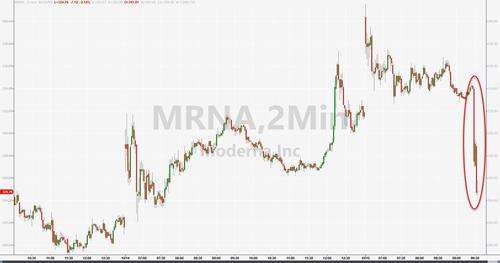 Following the same ‘science’ as the four Nordic nations that either banned completely or selectively, the FDA has decided to delay a decision on authorizing Moderna Inc.’s Covid-19 vaccine for adolescents to assess whether the shot may lead to heightened risk of a rare inflammatory heart condition, according to people familiar with the matter.

The Wall Street Journal reports that the FDA has been taking another look at the risk of the condition, known as myocarditis, among younger men who took Moderna’s vaccine, especially compared with those who received the vaccine from Pfizer Inc. and BioNTech SE, the people said.

Moderna Chief Medical Officer Paul Burton said the FDA’s own data on vaccinations among 18-to-25-year-olds doesn’t show any significant difference in the rate of myocarditis among people who took the Moderna or Pfizer-BioNTech vaccines.

“I think people can be reassured that the risk of myocarditis with an mRNA vaccine is low, it appears to be balanced between the different products,” he said in an interview.

Dr. Burton said Moderna has asked the Nordic countries for their data but hasn’t yet seen it.

Chief Executive Stéphane Bancel said during an interview this week that the benefits of the company’s vaccine, including its strong and long lasting protection, outweigh the risks.

“Some countries want to be ultraconservative, it’s of course their prerogative, but with the data I’ve seen I would be comfortable with anybody in my family who is a young male getting the vaccine,” he said.

The delay could be several weeks, but the timing is unclear, one of the people said.

The agency plans to further review data before deciding on whether to extend the vaccine’s eligibility to younger people, the people said.