Despite missing on most metrics during its earnings earlier in the week, Netflix shares soared back above $300 as shorts squeezed and hope ruled.

Since that time, things have not gone so well as the cash-burning machine has seen profit-taking slam the stock lower and news this morning of Verizon unveiling plans to offer its wireless subscribers 12 months of free access to Disney’s newest streaming service Disney+ is not helping at all.

Disney+ is set to launch for Nov. 12 for $6.99 per month, which Verizon plans to offer to existing Verizon mobile customers and new Fios Home customers for free. 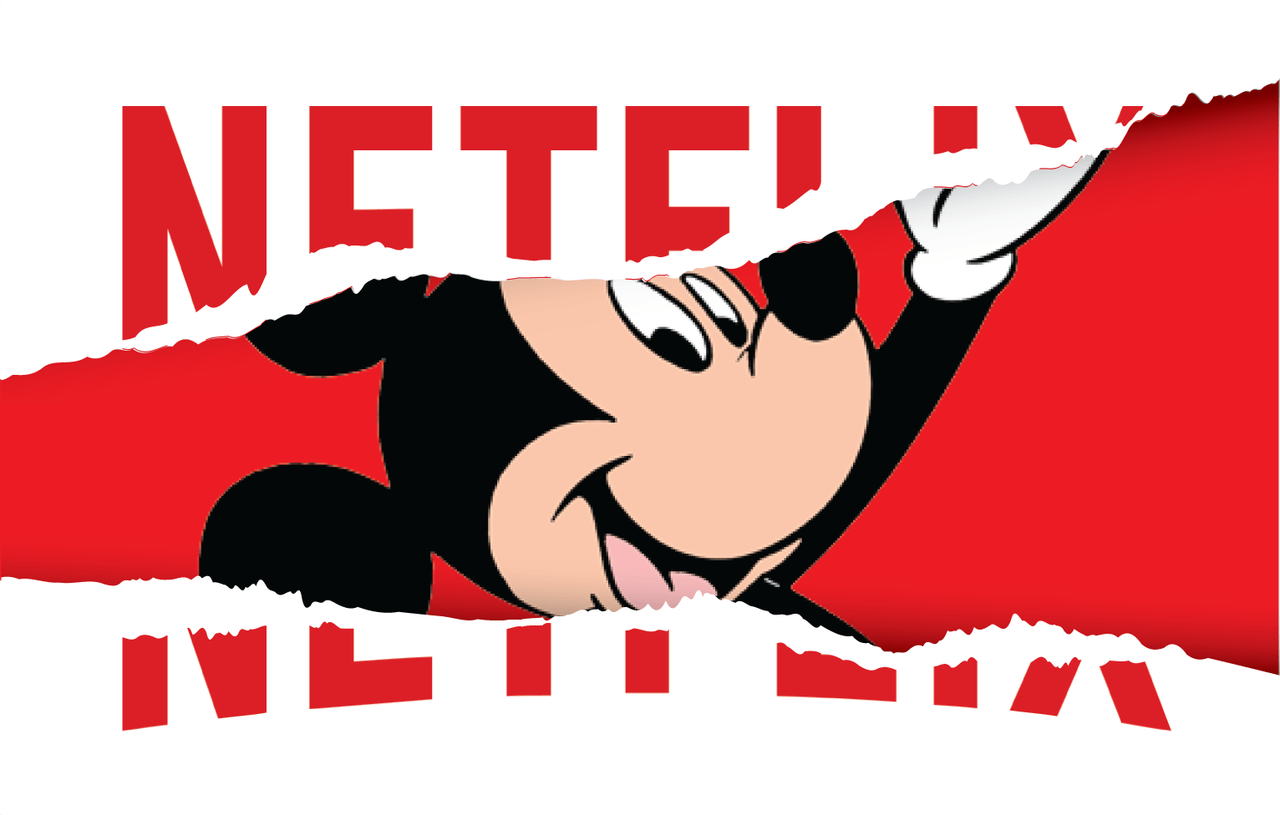 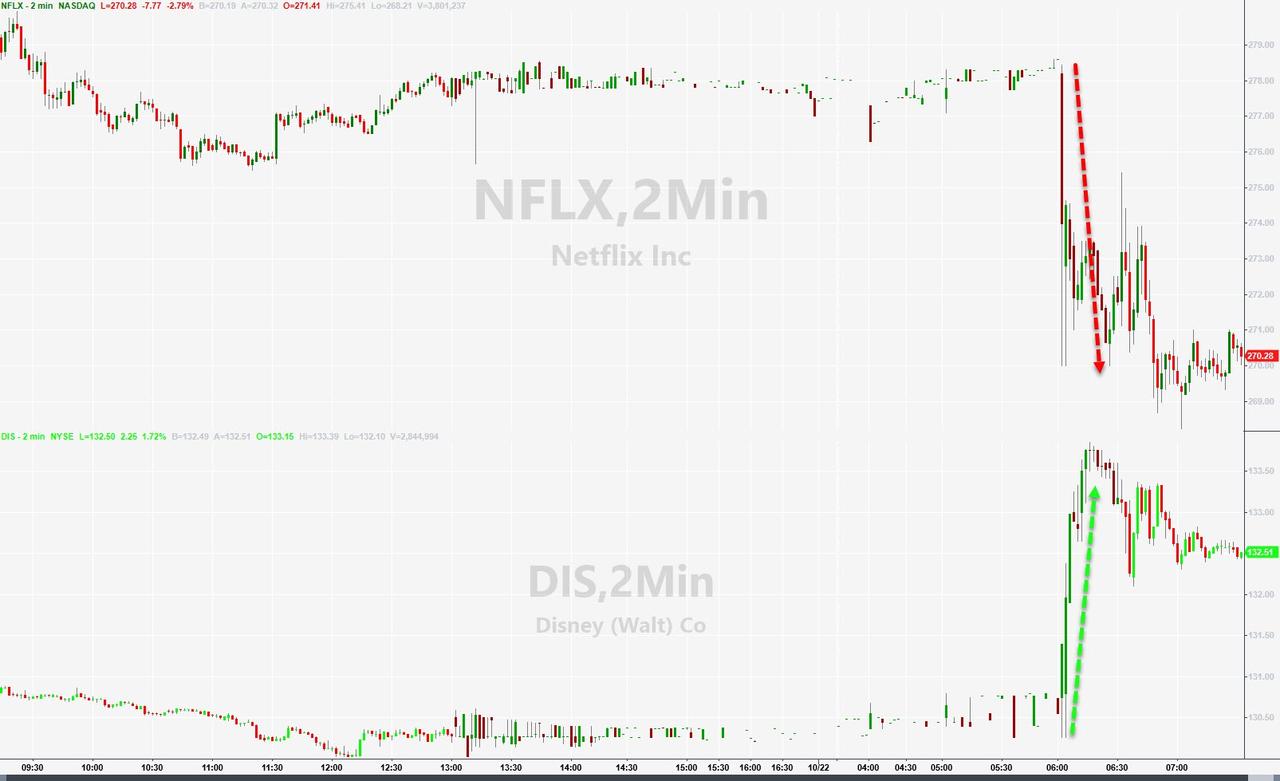 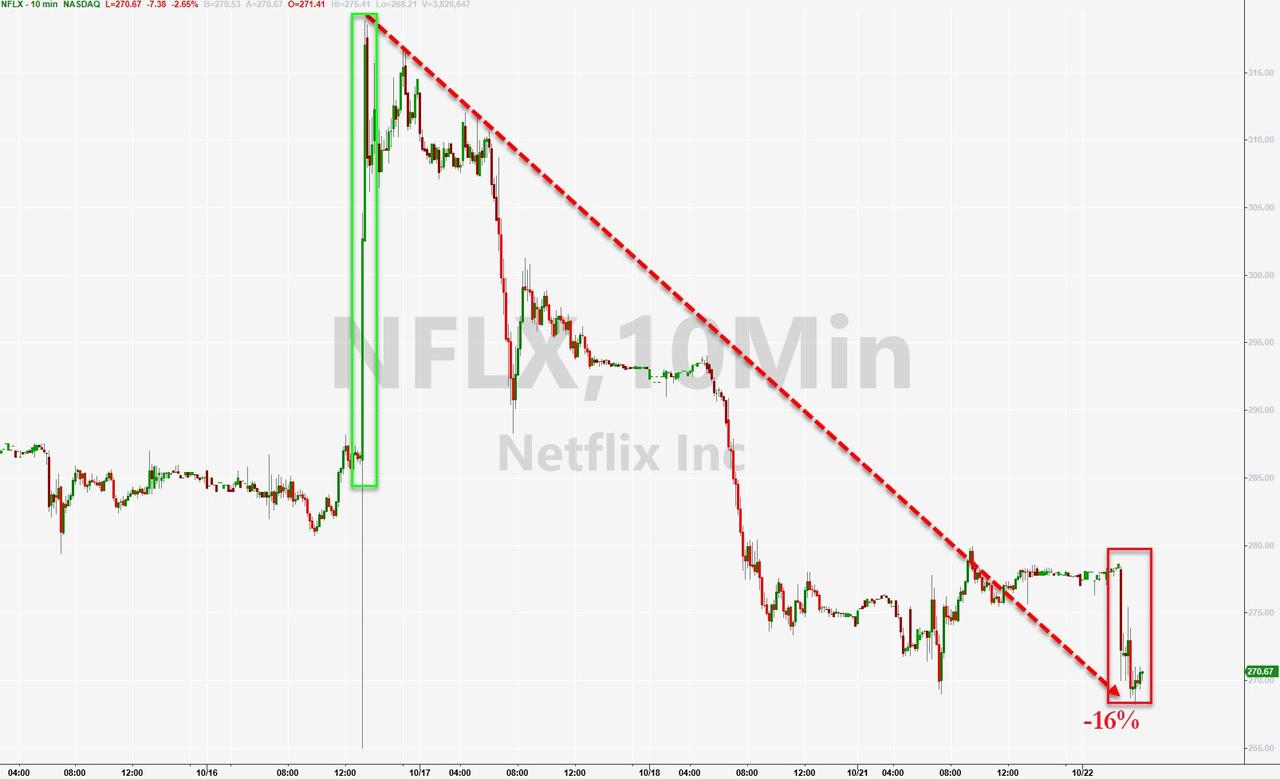 As a reminder, the company burned through $551 million in Q3, and has now burned money for 21 consecutive quarters, with Free Cash Flow since Q3 2014 a total of $9.4 billion. 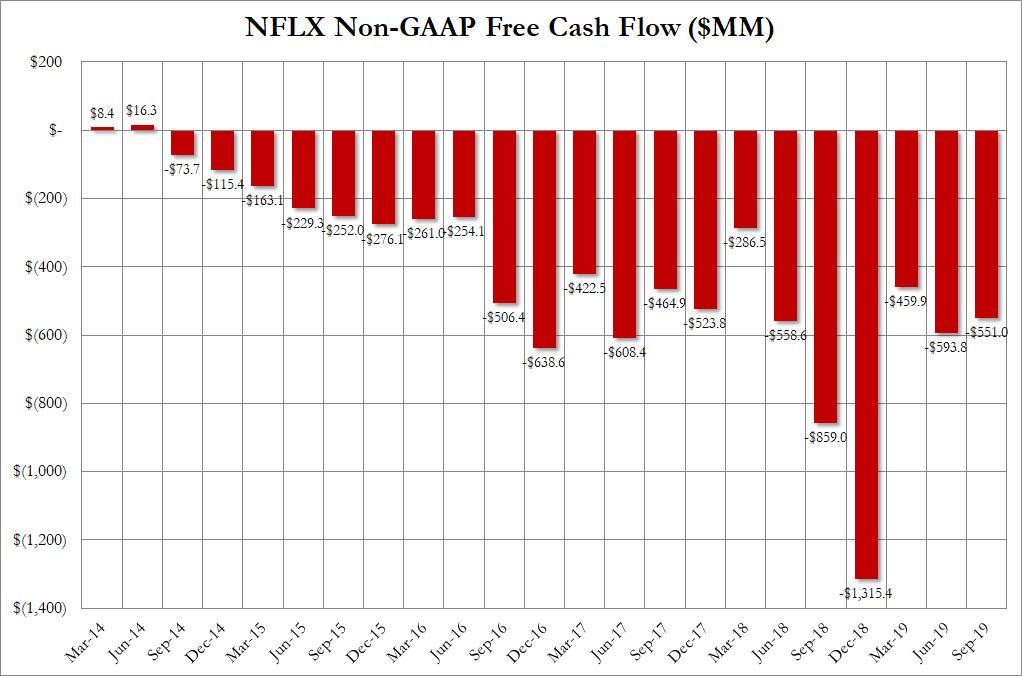 As the company itself states, “free cash flow in Q3 totaled -$551 million vs. -$859 million in Q3’18. For the full year 2019, we’re still expecting FCF of approximately -$3.5 billion.” There was some good news: NFLX says it is now “expecting free cash flow to improve in 2020 vs. 2019 and we expect to continue to improve annually beyond 2020. As we move slowly toward FCF positive, our plan is to continue to use the high yield market in the interim to finance our investment needs.”

But while Netflix’s lack of profitability and relentless cash burn is well known, the biggest risk facing the company now is competition, as Apple, HBO, NBC and Disney are set to join the Amazon, YouTube and Hule juggernaut. This is what Netflix said:

Many are focused on the “streaming wars,” but we’ve been competing with streamers (Amazon, YouTube, Hulu) as well as linear TV for over a decade. The upcoming arrival of services like Disney+, Apple TV+, HBO Max, and Peacock is increased competition, but we are all small compared to linear TV. While the new competitors have some great titles (especially catalog titles), none have the variety, diversity and quality of new original programming that we are producing around the world.

That remains to be seen, but for sure, today’s news from Verizon certainly brings that competition to top of mind for the giant cash-flow-burning machine… and with the competitors offering their product in the single-digits (or free), Netflix will have its hands full trying to keep its subscribers from fleeing, something Netflix co-founder Mark Randolf told CNBC after the earnings release.

“The launch of these new services will be noisy. There may be some modest headwind to our near-term growth, and we have tried to factor that into our guidance.”

Bottom line: Netflix still thinks of itself as so “small”, the market can easily accommodate more streaming providers. Considering the increasingly dismal state of US consumer finances, that may be a huge gamble that NFLX shareholders probably should consider not making.