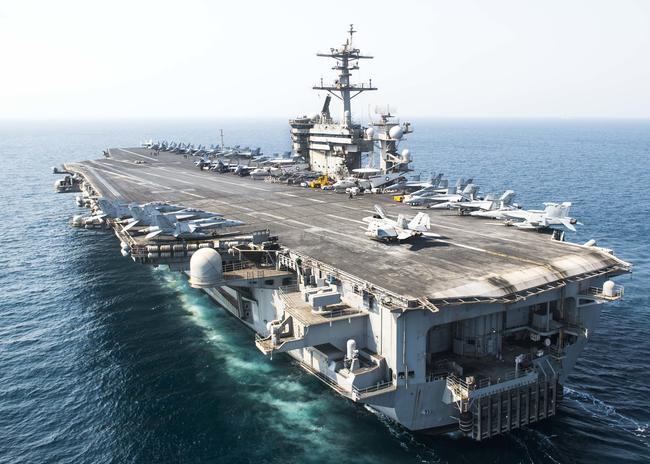 An absolute disaster is fast unfolding aboard the aircraft carrier USS Theodore Roosevelt in the Western Pacific causing emergency contingency plans to be put in place.

By Wednesday eight sailors aboard the carrier tested positive for COVID-19, but clearly the outbreak aboard the ship is nowhere near being contained as on Thursday the US Navy said that number has jumped to 23 sailors confirmed for the virus.

Pentagon officials further admitted the ability to conduct widespread testing aboard the ship is limited in a situation so dangerous that the carrier has been diverted from it’s original course, though Acting Navy Secretary Thomas B. Modly sought to stress “the ship is operationally capable and can do it’s mission if required” — no doubt a message ultimately meant for America’s rivals and enemies in the region.

The outbreak has sent ship crew and US troops in Guam scrambling, reports The Daily Beast, as it appears a nightmare outbreak among military service-members is unfolding:

U.S. Navy and Marine Corps service members in Guam were ordered on Wednesday to break their own quarantine to set up makeshift shelters for U.S. troops coming off a nuclear-powered aircraft carrier, where an outbreak of the novel coronavirus is rapidly spreading within the hulls of the ship.

Some of the U.S. troops at Naval Base Guam, located on the western side of the U.S. territory at Apra Harbor, were assembled into 100-man working parties to begin transforming some of the base’s facilities into temporary quarantine shelters for some of the 5,000 service members arriving from the aircraft carrier U.S.S. Theodore Roosevelt, a naval vessel where COVID-19 is spreading.

The nature of the emergency is unprecedented, causing one unidentified US service member to tell The Daily Beast, “We’re fucked” — given obvious concerns that base personnel will be potentially exposed to coronavirus via the disembarking USS Roosevelt crew.

The Pentagon did not try to downplay the situation. Acting Secretary Modly said it’s urgent enough to conduct tests on 100% of the crew, presumably in Guam.

“We found several more cases aboard the ship, we are in the process now of testing 100 percent of the crew of that ship to ensure that we are able to contain whatever spread that might have occurred there… but I also want to emphasize that the ship is operationally capable and can do it’s mission if required,”  Modly said at the Pentagon on Thursday.

On average, about 7,000 American troops are more are stationed among Guam’s multiple US bases (three major bases plus smaller HQs). The Roosevelt had recently been on deployment in the Persian Gulf and Indian Ocean region as part of the Trump administration’s “maximum pressure” campaign against Iran.

“But in Guam on Wednesday, both Navy and Marine Corps service members set up roughly 140 military beds in a basketball gymnasium,” the Daily Beast report continues. “To squeeze more troops into the gym, Navy medical professionals recommended measuring the six-foot distance per guidance from the CDC from the center of the bed rather than from the outer edges, meaning, that the beds are actually 3-feet apart.”

All of this means that some ten to twelve-thousand plus US personnel will be squeezed onto Guam’s bases at a moment the Navy is dealing with an alarming development of 133 cases total of COVID-19 branch-wide this week.