As a greater portion of the world begins to live more of their life online, the world’s top 100 websites continue to see explosive growth in their traffic numbers.

However, as VisualCapitalist’s Nick Routley notes,  to claim even the 100th spot in this ranking, your website would need around 350 million visits in a single month. Using data from SimilarWeb, we’ve visually mapped out the top 100 biggest websites on the internet. Examining the ranking reveals a lot about how people around the world search for information, which services they use, and how they spend time online. 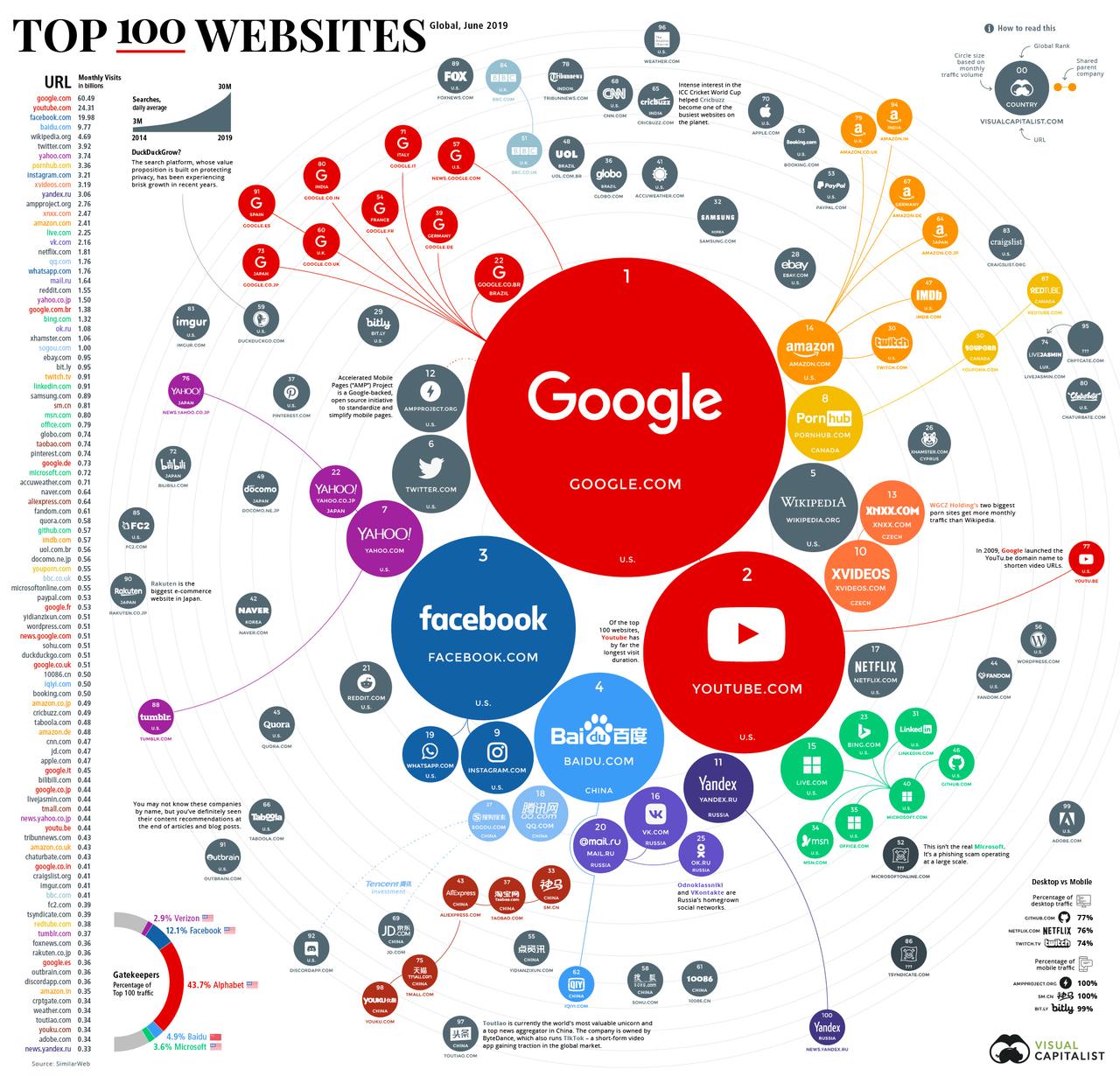 Note: This is a ranking of biggest websites, specifically. Brands that extend across platforms or serve the majority of their users through an app will not necessarily rank well on this list. As a result, you’ll notice the absence of companies like WeChat and Snapchat.

The 100 biggest websites generated a staggering 206 billion visits in June 2019. Google, YouTube, and Facebook took the top spots, followed by Baidu and Wikipedia. Below is the full ranking: 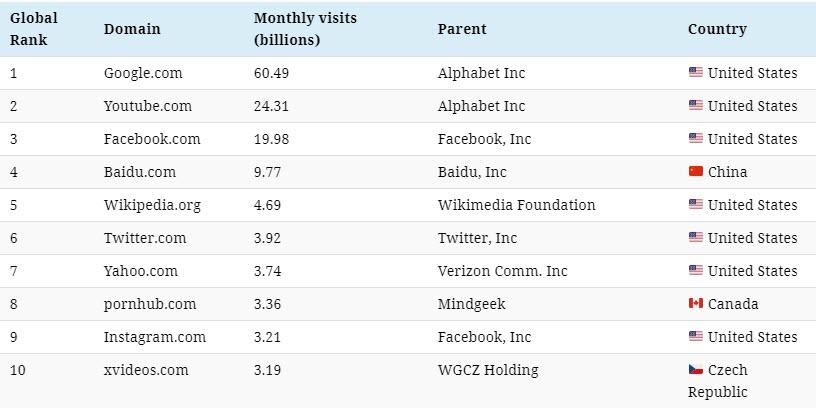 Search engines provide the connective tissue that binds the internet together, and they accounted for the majority of website traffic in the top 100 ranking.

Google is the undisputed top website in nearly every country in the world. In fact, Alphabet’s 11 domains in the top 100 ranking – including YouTube and a number of international versions of Google – racked up an impressive 90 billion visits in a single month.

Exceptions to Google’s dominance can be found in China (Baidu) and Russia (Yandex), where homegrown search engines have managed to capture the domestic market.

One scrappy competitor, DuckDuckGo, is slowly gaining prominence as an alternative to Google. The search engine’s focus on user privacy appears to be resonating with internet users as the site’s traffic has surpassed 500 million visits per month.

Video streaming and sharing is another major driver of global internet traffic.

Thanks to high-powered phones and bigger data plans, video is now a prominent portion of internet content consumption. This can take a few forms, from binge watching TV shows on Netflix to short-form video uploads on platforms like Douyin and Instagram.

Live streaming is increasingly a bigger part of the mix. Twitch, which is focused on gaming, is now ranked 30th in the world in web traffic. The Amazon-owned platform is now so popular that on any given night, its viewership surpasses many of the major U.S. cable networks.

In the case of Microsoft, acquiring Github and Linkedin helped the company target new markets and grow their overall presence online. Amazon’s acquisition of Twitch proved to be a good bet, and Instagram continues to breathe new life into Facebook, which has seen a backlash focused on its original namesake social network.

Google isn’t sitting still either. The company recently championed the open-source AMP Project to help improve the performance of mobile pages, which are increasingly bogged down by adware, unoptimized images, and JavaScript. In a short amount of time, the AMP Project has taken off to become one of the biggest websites in the world.

The project is not without controversy though.

Critics point out that cached AMP pages – which are hosted by Google – essentially cut out content creators, and that non-compliant pages may lose their ranking on mobile search results. As the project moves towards becoming a foundation, it remains to be seen how AMP will evolve and how much involvement Google will have in the future.

The Geography of the Top 100 Websites

The internet may be a global network, but many of the gatekeepers are still located in the United States. If international domain suffixes of companies like Amazon and Google are counted, 60 of the 100 websites in the ranking are American.

Below is a breakdown of the Top 100 by country.

China is a strong runner-up, with 14 websites in the Top 100. While most of these Chinese companies are focused on the sizable domestic market, some are also making global inroads through investment. Tencent has partially backed the fast-growing chat platform, Discord, and it also has double-digit stakes in Snapchat and Spotify.

With the exception of Baidu, all of the biggest websites in the world have swelled in size by serving a global audience. As the tech market continues to mature in China, it remains to be seen whether Chinese companies can successfully move beyond the firewall to become the next Facebook or Google.