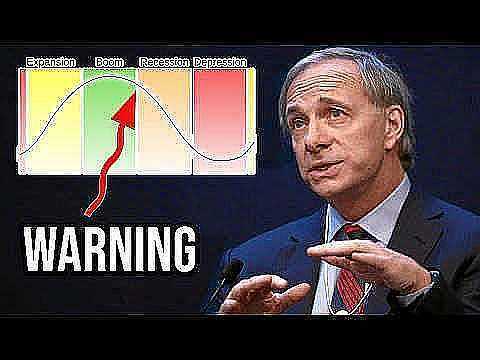 Ray Dalio has come out and said we’re in the later stages of the debt cycle. Let’s talk about why this is the case & the impact this can have..

💰 Get FREE STOCKS With WeBull: http://bit.ly/WeBullStock

Ray Dalio recently did an interview with Bloomberg finance and in this interview he sent out a bit of a warning. He explained why we are in the later stages of the debt cycle and why this is a problem…

So let me explain that, sometimes it can be a little hard to grasp exactly what Dalio’s getting at. I’m not entirely sure if you’re aware of this or not, but we’ve had a pandemic over the past year and a bit. This pandemic has produced a number of things including business troubles, job losses, a struggling economy. And this in turn means we’re in need of a lot of money, from the government.

Prints a lot of money, obviously it’s all done online now, and he lends it to the government. This is called debt monetization. This type of behavior Dalio says is typical of what happens in the late stages of the cycle…

So here’s the situation, let me break this down piece by piece. First of all, we’ve talked about this, the government is in a situation now, where they have to sell bonds. They just need the money to fund all of their spending. And then we take a look at these bonds, they’re pretty terrible.

Ok, so right now you get 1.7% a year on a ten year treasury bond. Being straightforward, that is bad! Because inflation on average is around 2-3% a year, so if you own one of these you actually lose money each year…

So we’re in a situation now where, the government has to sell a lot of bonds, to fund itself, but they’re selling a poor product so to speak. Because with inflation, you actually lose money on these bonds.

So there’s causes a big dilemma for both the government and the fed. No one wants to buy their bonds. And if no one buys them, then the government doesn’t have any money to give out as stimulus checks or loans for businesses who need it. And the economy risks a collapse.

So the fed can either allow this risk to occur, or they can print money and buy the bonds themselves. The problem if you do this, is first you risk the devaluation of the dollar. Because you’re putting more of them into the system, and because there’s more they become worth less. And secondly you risk inflation.

So the FED is stuck between a rock and hard place, and either decision that they make, has severe consequences…

And the other thing, as if this wasn’t bad enough, the current holders of government bonds, a lot of them aren’t happy with the returns that they’re getting. Because it’s negative once you account for inflation. So these holders of government debt could potentially start selling their bonds. Foreign investors & US investors who own most of the debt, might just decide hey, there’s better places to put my money.

And so if they start selling, plus the government has to sell bonds to fund itself, as Dalio says “that could produce a real dilemma. That’s classic late long-term debt cycle type stuff”.

So over the past year or so, a big talking point when it comes to investors is the rise of the 10 year treasury bond. It went from about 0.6% to 1.7%. Almost tripling. So this has affected bond holders a lot. The next stage as Dalio talks about, and we haven’t seen this yet, is when it starts to affect stock prices.

Because the more these yields go up, the more investors start saying hang on, maybe it’s better that I get out of pricey stock market and into something safe like long-term bonds. As Dalio said, maybe we see a 10 or 15% correction and the federal reserve can tolerate it. But after it’s gone through bonds, gone through stocks, the next stage is it starts hurting the economy…

DISCLAIMER: It’s important to note that I am not a financial adviser and you should do your own research when picking stocks to invest in. This video was made for educational and entertainment purposes only. Consult your financial adviser. * Some of the links on this webpage are affiliate links. This means at no additional cost to you, we earn a commission if you click through and make a purchase and/or subscribe. This has no impact on my opinions, facts or style of video.