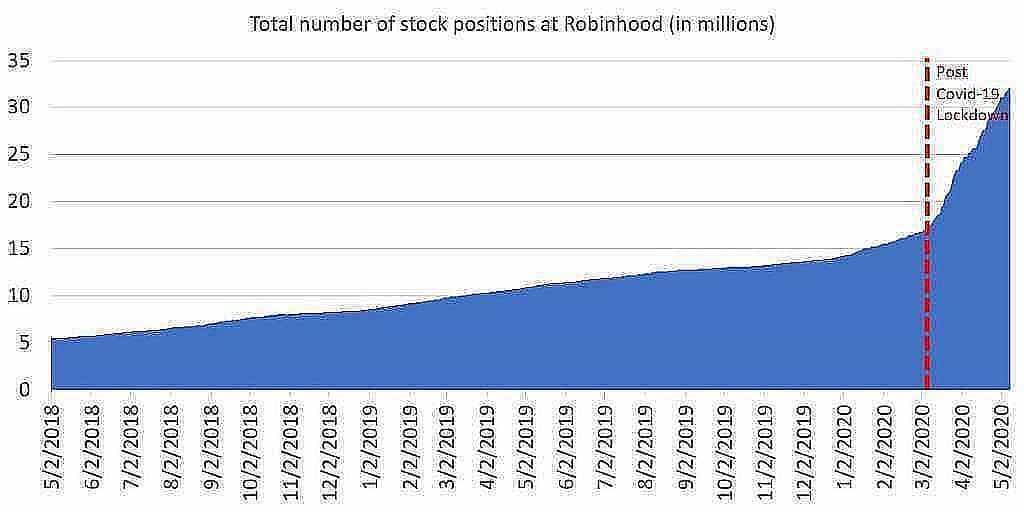 Some say the popularity of the Reddit page Wallstreetbets was the signal retail investing was overheated. It’s always tough to say when a market is overheated because rallies can always keep going longer than you expected. That’s why I look at the fundamentals, the economy, and valuations to formulate my opinion.

To be clear, sentiment is a better timing tool in downturns. That’s because stocks fall quicker than they rise. Plus, the status quo is an improving economy. U.S. stocks have had great inflation adjusted returns in the past 100 years. You’re making a much bigger bet than I’m willing to make if you think that won’t continue.

It seems obvious that sentiment was too euphoric in late 2019 and early 2020, but that’s because stocks fell sharply this spring. However, stocks didn’t fall because of euphoria. They fell because of a virus. There was extreme positive sentiment expressed in the form of shorting the VIX in early 2018 and that only caused a 10% correction.

Any sort of decline is worth gaming if you can, but recognize that positive sentiment didn’t end the bull market. It took a global pandemic to end the bull market and that only created a short decline. This could still be a secular bull market which means there are amazing returns ahead in the long run.

Last two paragraphs aimed to setup the chart above. As you can see, after the COVID-19 lockdown the number of stock positions in Robinhood trading accounts is at a record high. There was an exponential rise in signups during the crash which evidently led to the website and app crashing in March. The website’s crash did nothing to stop people from joining which isn’t what most predicted. That’s likely because there is a cyclical uptrend in signups.

Many new investors could be using their stimulus checks to buy stocks. Investors are buying the dip more than ever. This is an amazing scenario because we were told that retail investors would quit on the market. In fact, the rich and money managers panicked in March.

To be clear, the AAII individual investor sentiment survey was negative, but individual passive investors didn’t sell and Robinhood signups exploded. As I mentioned, this isn’t about Robinhood. It’s the case with all brokers. Also, Robinhood isn’t the only one that had problems.

Interactive Brokers had problems with allowing investors to buy oil contracts just as they expired which is terrible because oil went lower than anyone expected and blew up people’s accounts. They actually lost more money than they could ever pay back.

A final point is to avoid being smug about Robinhood investors. Some people view themselves as more sophisticated than these traders which encourages them to bet against whatever Robinhood traders are doing. That’s the inexperienced plan. Don’t go against these traders. It’s a mistake to use sentiment as your only indicator.

U.S. Tech Is Eating The World

Just like you can’t bet against Robinhood traders, you can’t short tech stocks just because they are high. As you can see from the chart below, U.S. tech stocks are taking over the world. Nasdaq Composite has a bigger market cap than the MSCI World Index outside of America. That ratio is nearly double where it was at the peak of the tech bubble.

With this rise, we are seeing the tech bubble was ahead of its time. Many tech stocks ended up being extremely profitable (just not many of the ones that had their valuations explode in the late 1990s). Euphoria was justified; it was just too early (and in some of the wrong names).

If you have read some of my previous articles, you know I think many cloud stocks are overvalued. That doesn’t mean you can short them. Personally, I like to focus on the companies that are the most overvalued with the least competitive advantages such as Zoom which will be forced to compete with Facebook (it’s already competing with Microsoft). Cloud stocks have momentum on their side. They are also secular growth stocks that are outperforming cyclically because of the work from home play.

Plus, the fact that high growth cloud stocks are doing well in a recession makes investors think of them as safety stocks. Companies such as ServiceNow are outperforming staples firms like Coke. What PE multiple would Coke get if it had 30% sales growth?

Answer is what ServiceNow is getting. To be clear, I’m optimistic on cloud stocks long term, just wouldn’t chase them now. Best play is to have bought some during the decline. That advice doesn’t do much good now. If you hold a relatively small portion of your portfolio in cloud stocks, don’t sell.

For better or for worse, America is reopening. The country hasn’t seen as much of a decline in the number of new cases as other countries such as Italy, but there has been an increase in testing. If you believe the antibody tests, many more people have had it than have tested positive. That’s partially because of asymptomatic cases.

As you can see from the chart below, the percentage of America’s GDP under lockdown has fallen which has pushed the global percentage lower. Keep in mind, the first declines might be the quickest because many states aren’t reopening fully and the biggest cities such as New York City are delaying their reopening.

On the one hand, the economy won’t go back to normal anytime in the next few months. On the other hand, those pointing this out aren’t providing us with anything we don’t know. Some economists think the stock market is anticipating things going back to normal soon which is why they are pointing the data out.

However, they don’t know that the SaaS stocks are driving the rally. If investors thought the economy was going back to normal, they’d buy brick and mortar retail stocks and restaurants. The SaaS stocks that have rallied have already reported earnings which proves they can survive in this new world.