Shocking Images: Fleeing Armenians Burn Own Homes Rather Than Leave Them To Azerbaijan

The Russia-brokered peace deal signed last week between the leaders of Armenia and Azerbaijan at a moment Azerbaijan appeared to have the military upper-hand has held firmly as nearly 2,000 Russia peacekeeping troops are also on the ground in Nagorno-Karabakh.

But it’s come at a huge cost for the Armenian side in terms of possession of the disputed territory following six weeks of fierce fighting that has left thousands dead and wounded. As part of the truce terms Armenia and Nagorno-Karabakh must return the Armenian ethnic districts of Aghdam, Kalbajar and Lachin to Azerbaijan according to a timeline negotiated under the Russians.

It’s expected to be completed by December 1, with Armenian armed forces and what Azerbaijan has dubbed “illegal Armenian settlers” initially given just days to withdraw.

However, in at least one district Baku has agreed to extend the date for complete handover: “Azerbaijan agreed to prolong the deadline for the withdrawal from Kalbacar of Armenian armed forces and of illegal Armenian settlers until November 25,” the office of Azerbaijani President Ilham Aliyev told a news conference this weekend.

But Aghdam, Kalbajar and Lachin districts will ultimately see all Armenians gone by Dec. 1, according to the terms.

Over the days international media correspondents have observed Armenians living in the Kalbajar district setting fire to their homes as they flee, in order to prevent any Azeri from ever occupying them.

The New York Times reported of the shocking scenes:

The cars, trucks and vans jamming the mountain roads deep into the night on Saturday brimmed with all the possessions that the fleeing Armenians could rescue: upholstered furniture, livestock, glass doors.

As they left, many set their homes on fire, enveloping their exodus in acrid smoke and illuminating it in an orange glow. Near some of the burning houses stood older ruins: the remains of homes abandoned a quarter-century ago, when Azerbaijanis fled and Armenians moved into the region.

Armenians are burning their own homes as the clock ticks down to a handover of territory to Azerbaijan under a Russia-brokered peace deal that followed six weeks of fighting over the enclave of Nagorno-Karabakh and surrounding areas https://t.co/Qp3sTz3SwB pic.twitter.com/EvHkwk2oAM

The fleeing Armenians in some instances openly expressed that they want to ensure no future Azerbaijan resident can use the dwellings.

“They will already be here tomorrow morning. The Azeris. Screw them. Let them live here, if they can,” he said, as the fire got going.

Next door, grey smoke was rising from what was left of his own house.

Armenians are resorting to a scorched earth policy as the clock ticks down to a handover of territory to Azerbaijan under a Russia-brokered peace deal that followed six weeks of fighting between ethnic Armenian forces and Azeri troops over the enclave of Nagorno-Karabakh and surrounding areas.

#Armenians are burning their own homes in #Artsakh as their ancestral lands are due to be turned over to #Azerbaijan.#WarCrimes #EthnicCleansing #HumanitarianCrisis #NagornoKarabakh #Armenia pic.twitter.com/KbnWa3nw8U

Below are some further images from Kalbajar: 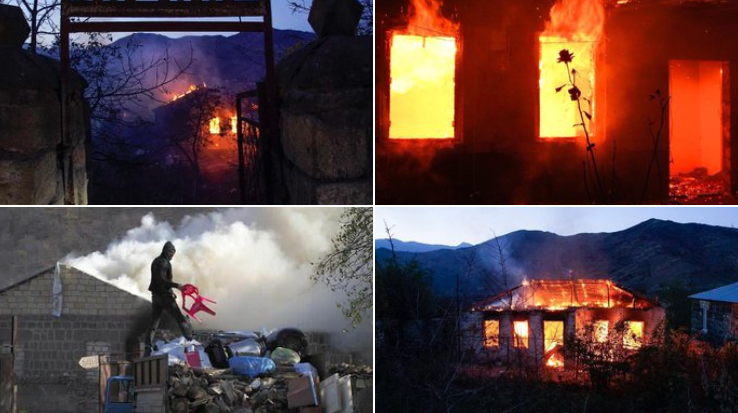 Above: “Many residents paid their final visits to the Dadivank monastery, an Armenian place of worship built between the 9th and 13th centuries,” according to Moscow Times.