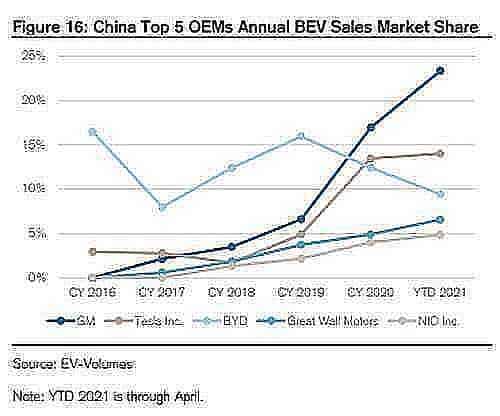 Tesla Global EV Market Share Collapses To 11% In April, From 29% In March: Credit-Suisse

It marks Tesla’s lowest monthly global market share since January 2019. The “greater than usual drop” came between the last month in Q1 and the end of the first month of Q2.

The company’s market share in the world’s largest auto market – China – collapsed to 8% in April from 19% in March. That drop should be no surprise given the collapse in sales numbers we reported for Tesla in China last month. “GM remained the share leader in China in April, with a 20% share, driven by continued volume traction of the low cost Wuling HongGuang Mini,” Levy’s note, summarized by Bloomberg, pointed out.

In Europe, the company posted EV market share of just 2% compared to 22% in March.

In the United States, market share fell to 55% versus 72% in March.

While Tesla remains at the top of the heap in the U.S., there’s no telling how long that is going to last. The company is now facing stiff competition from legacy automakers and is dealing with backlash from both dropping features and raising prices on its models.

It’s almost like being a car manufacturer isn’t as easy as Elon Musk once pitched to the investing public.

Meanwhile, it isn’t as though global EV sales are slowing down. Penetration of EVs continues globally:

Levy noted that global EV sales in April represented 6.1% of total global new vehicle sales, still far ahead of the 2020 pace of 4.4%.

But Tesla’s registration numbers in places like the Netherlands, Canada, Switzerland and Denmark appear to be lagging their pace in 2020:

Recall, we noted Tesla’s collapse in Chinese sales for April in a report we wrote in mid-May. The company’s growth in April “slowed precipitously” after weeks of controversy that started with a protest at the Shanghai Auto Show calling into question the quality of Tesla’s brakes. What followed was weeks of negative press in China, where state media decried the company as “arrogant” and urged it to focus on the quality of its vehicles.

Data from April showed that just 11,949 Tesla vehicles were registered in the country, down sharply from the 34,714 registrations in March, according to Bloomberg.

In addition to that data from China Automotive Information Net, additional data from China’s Passenger Car Association showed that the company sold 25,845 Chinese-made vehicles in April, down from 35,478 in March. Separately, 14,174 EVs were exported, due to demand from Europe, the report noted.