Authored (mostly satirically) by CJ Hopkins via The Consent Factory, 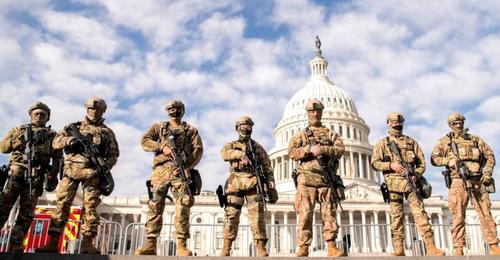 According to a “National Terrorism Advisory System Bulletin” issued by the DHS on January 27, these DCEs, HVEs, VCTEs, VRDEs, IMAEs, and PWMLFUs are “ideologically-motivated violent extremists with objections to the exercise of governmental authority” and other “perceived grievances fueled by false narratives.” They are believed to be “motivated by a range of issues, including anger over Covid-19 restrictions, the 2020 election results, police use of force,” and other dangerous “false narratives” (e.g., the existence of the “deep state,” “herd immunity,” “biological sex,” “God,” and so on).

“Inspired by foreign terrorist groups” and “emboldened by the breach of the US Capitol Building,” this diabolical network of “domestic terrorists” is “plotting attacks against government facilities,” “threatening violence against critical infrastructure” and actively “citing misinformation and conspiracy theories about Covid-19.” For all we know, they might be huddled in the “Wolf’s Lair” at Mar-a-Lago right now, plotting a devastating terrorist attack with those WMDs we never found in Iraq, or generating population-adjusted death-rate charts going back 20 years, or posting pictures of “extremist frogs” on the Internet.

The Department of Homeland Security is “concerned,” as are its counterparts throughout the global capitalist empire. The (New Normal) War on Domestic Terror isn’t just a war on American “domestic terror.” The “domestic terror” threat is international. France has just passed a “Global Security Law” banning citizens from filming the police beating the living snot out of people (among other “anti-terrorist” provisions). In Germany, the government is preparing to install an anti-terror moat around the Reichstag. In the Netherlands, the police are cracking down on the VCTEs, VRDEs, and other “angry citizens who hate the system,” who have been protesting over nightly curfews. Suddenly, everywhere you look (or at least if you are looking in the corporate media), “global extremism networks are growing.” It’s time for Globocap to take the gloves off again, root the “terrorists” out of their hidey holes, and roll out a new official narrative.

I think you know, but I’ll go ahead and tell you.

See, the problem with the original “Global War on Terror” was that it wasn’t actually all that global. It was basically just a war on Islamic “terrorism” (i.e., resistance to global capitalism and its post-ideological ideology), which was fine as long as GloboCap was just destabilizing and restructuring the Greater Middle East. It was put on hold in 2016, so that GloboCap could focus on defeating “populism” (i.e., resistance to global capitalism and its post-ideological ideology), make an example of Donald Trump, and demonize everyone who voted for him (or just refused to take part in their free and fair elections), which they have just finished doing, in spectacular fashion. So, now it’s back to “War on Terror” business, except with a whole new cast of “terrorists,” or, technically, an expanded cast of “terrorists.” (I rattled off a list in my previous column.)

In short, GloboCap has simply expanded, recontextualized, and pathologized the “War on Terror” (i.e., the war on resistance to global capitalism and its post-ideological ideology). This was always inevitable, of course. A globally-hegemonic system (e.g., global capitalism) has no external enemies, as there is no territory “outside” the system. Its only enemies are within the system, and thus, by definition, are insurgents, also known as “terrorists” and “extremists.” These terms are utterly meaningless, obviously. They are purely strategic, deployed against anyone who deviates from GloboCap’s official ideology … which, in case you were wondering, is called “normality” (or, in our case, currently, “New Normality”).

In earlier times, these “terrorists” and “extremists” were known as “heretics,” “apostates,” and “blasphemers.” Today, they are also known as “deniers,” e.g., “science deniers,” “Covid deniers,” and recently, more disturbingly, “reality deniers.” This is an essential part of the pathologization of the “War on Terror” narrative. The new breed of “terrorists” do not just hate us for our freedom … they hate us because they hate “reality.” They are no longer our political or ideological opponents … they are suffering from a psychiatric disorder. They no longer need to be argued with or listened to … they need to be “treated,” “reeducated,” and “deprogrammed,” until they accept “Reality.” If you think I’m exaggerating the totalitarian nature of the “New Normal/War on Terror” narrative, read this op-ed in The New York Times exploring the concept of a “Reality Czar” to deal with our “Reality Crisis.”

And this is just the beginning, of course. The consensus (at least in GloboCap circles) is, the (New Normal) War on Domestic Terror will probably continue for the next 10 to 20 years, which should provide the global capitalist ruling classes with more than enough time to carry out the “Great Reset,” destroy what’s left of human society, and condition the public to get used to living like cringing, neo-feudal peasants who have to ask permission to leave their houses. We’re still in the initial “shock and awe” phase (which they will have to scale back a bit eventually), but just look at how much they’ve already accomplished.

And that’s just the economic damage. The attack on society has been even more dramatic. GloboCap, in the space of a year, has transformed the majority of the global masses into an enormous, paranoid totalitarian cult that is no longer capable of even rudimentary reasoning. (I’m not going to go on about it here … at this point, you either recognize it or you’re in it.) They’re actually lining up in parking lots, the double-masked members of this Covidian cult, to be injected with an experimental “vaccine” that they believe will save the human species from a virus that causes mild to moderate symptoms in roughly 95% of those “infected,” and that over 99% of the “infected” survive.

So, it is no big surprise that these same mindless cultists are gung-ho for the (New Normal) War on Domestic Terror, and the upcoming globally-televised show trial of Donald Trump for “inciting insurrection,” and the ongoing corporate censorship of the Internet, and can’t wait to be issued their “Freedom Passports,” which will allow them to take part in “New Normal” life — double-masked and socially-distanced, naturally — while having their every movement and transaction, and every word they write on Facebook, or in an email, or say to someone on their smartphones, or in the vicinity of their 5G toasters, recorded by GloboCap’s Intelligence Services and their corporate partners, subsidiaries, and assigns. These people have nothing at all to worry about, as they would never dream of disobeying orders, and could not produce an original thought, much less one displeasing to GloboCap, if you held a fake apocalyptic plague to their heads.

As for the rest of us “extremists,” “domestic terrorists,” “heretics,” and “reality deniers,” (i.e., anyone criticizing global capitalism, or challenging its official narratives, and its increasingly totalitarian ideology, regardless of our specific DHS acronyms), I wish I had something hopeful to tell you, but, the truth is, things aren’t looking so good. I guess I’ll see you in a quarantine camp, or in the psych ward, or an offshore detention facility … or, I don’t know, maybe I’ll see you in the streets.