Airpocalypse: It’s morbid to think about.

But one of the leading causes of death is air pollution.

According to the World Health Organization, an estimated that 7 million people die every year from air pollution-related issues.

Air pollution is caused by solid and liquid particles along with gases suspended in the air.

Did you know that coal-fired power plants still make up over 30% of global power generation? 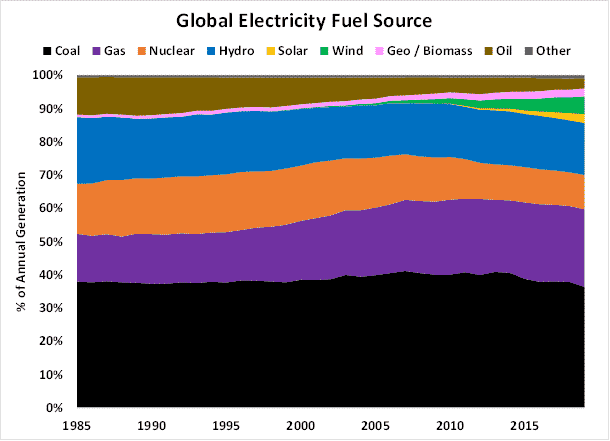 Coal is by far the dirtiest fuel to burn.

It makes all the sense in the world that one of the first things governments are the world are going to do is say “no more coal”.

I expect governments to force mass closures of coal-fired plants over the coming decades.

However, while that sounds good on paper, how does one substitute new power generation for coal?

After all, replacing 30% of global baseload power production is not something that can happen overnight.

Not to mention, telling citizens to reduce power consumption by 30% is out of the question.

Is Nuclear Power the Baseload Solution to Save the World?

What makes it especially difficult is that coal is “baseload power”.

This means that plants run continuously, with minimal shutdowns.

While solar and wind power provides electricity, it is only intermittent. Power is only generated when the sun shines or the wind blows.

Yes, we can store it in large batteries, but we are nowhere near global adoption at a utility scale that is cost-efficient.

That day will come but it isn’t right now nor within this decade.

Nuclear power is powered by uranium. And it produces enormous amounts of clean energy.

In fact, there are zero emissions. Climate crusaders will love that, no doubt.

Here is a chart which shows the carbon dioxide (CO2) emitted per baseload power source. 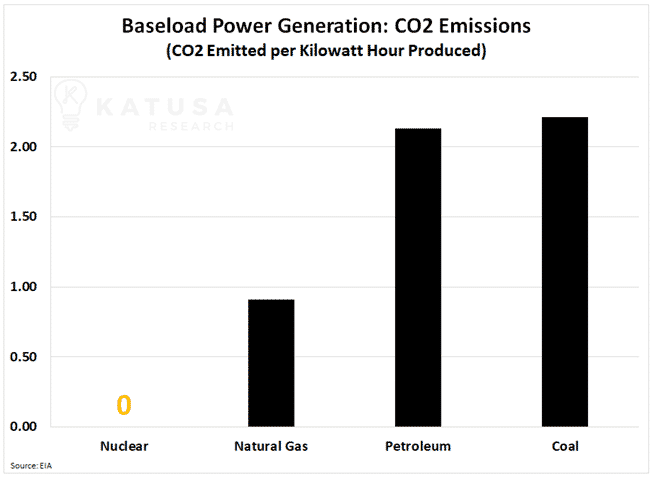 I have been actively involved in the uranium sector for nearly 20 years. I’m also the largest independent financier in uranium globally.

I have been to the uranium mines that matter in the world (and I don’t know of anyone else in the industry that can claim that).

Two years ago, I wrote a short report.

In fact, the CFO of one of the world’s largest uranium producers was even upset at me and shared his comments with me.

I had many self-acclaimed gurus and internet trolls attack my report—They MISSED the whole point of the report.

The report was about creating the worst possible scenario for uranium—and if my recommendations could do well in that framework—then I knew I had a winning portfolio of uranium stocks.

So how did Katusa Research do? AWESOME!

Here is the factual evidence. 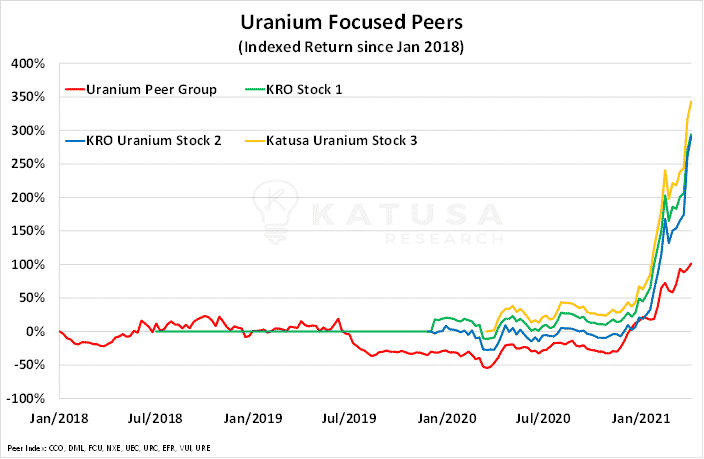 So, I invested millions of dollars into the company alongside my subscribers at the same time and same price…

The first recommendation is up over 301% in gains as the stock traded HEAVY volume (not some dinky exchange that trades by appointment).

I say may have and could have because our legal team doesn’t allow us to say the realities… Even though we ourselves participated at the same time and price and experienced the same gains.

Are these results typical for every investment, speculation, or trade – no.

But we’ve asked some of our most successful subscribers for feedback and here’s what they responded with:

At the time, uranium equities were as hated as they came.

And patient investors are now being rewarded for buying what no one else was looking at.

What’s Next for Uranium?

Today, the outlook for uranium is better than any time in the past decade.

Recently, rumors are circulating that European Union will be announcing that nuclear qualifies as a green investment.

This paves the way for enormous funding opportunities to build smaller, modular nuclear reactors with shorter construction and permitting times.

It’s a thesis that I have suggested for years…

And more recently Bill Gates has also gotten on board with, saying:

The Nuclear Narrative is Changing

If nuclear qualifies as a green investment in Europe, it’s only a matter of time before other regions take notice.

In the United States alone, there are over 200 gigawatts of coal-fired electricity generation in operation today.

Coal-fired electricity powers over 25 million homes in America. This represents 23.4% of US power generation.

USA has improved significantly as it was just a short while ago that 50% of America’s electrical generation came from coal.

Part or all of this could be easily substituted with clean, baseload power from nuclear power plants.

According to the International Energy Agency (IEA) and CarbonBrief, all coal-fired plants need to close by 2040 if we want to hit our emission reduction goals.

If governments elect to go nuclear, it will require enormous amounts of uranium.

To put it in perspective…

According to both the World Nuclear Association and International Atomic Agency, there are over 440 operable reactors in 50 different countries across the world. This requires 178 million pounds of U3O8.

Being the First is Fun

Whether you like my style or not is irrelevant.

The facts are what you need to listen to. I was asked to give the Keynote presentation at the World Nuclear Fuel Summit for a reason, my research and conclusions are ahead of the curve.

Subscribers to Katusa’s Resource Opportunities will be the first to read about this opportunity.

It’s probably the single most exciting company and trend I’ve come across in years.

Sounds like an exaggeration, I know. But when you see exactly what I’m talking about, you will likely come to the exact same conclusion.

So, if you’re not doing your due diligence on things the crowd is neglecting…

Then you could very well miss out on the next sector’s returning triple-digit gains down the road.

The post The Nuclear Shift in the Uranium Narrative appeared first on Katusa Research.