Update: Not long after we hinted that today’s action in the US repo market is similar to what took place in 2013 China, when an explosion in funding rates nearly destroyed the local banking system before the PBOC intervened, the Fed has done just that, and as everyone – finally – began to realize this morning that something was very broken in the short-term liquidity markets, as overnight general collateral repo exploded to 10%…

… the New York Fed announced it will conduct its first overnight repo operation (for up to $75 billion) for the first time in a decade.

In accordance with the FOMC Directive issued July 31, 2019, the Open Market Trading Desk (the Desk) at the Federal Reserve Bank of New York will conduct an overnight repurchase agreement (repo) operation from 9:30 AM ET to 9:45 AM ET today, September 17, 2019, in order to help maintain the federal funds rate within the target range of 2 to 2-1/4 percent.

This repo operation will be conducted with Primary Dealers for up to an aggregate amount of $75 billion. Securities eligible as collateral in the repo include Treasury, agency debt, and agency mortgage-backed securities. Primary Dealers will be permitted to submit up to two propositions per security type. There will be a limit of $10 billion per proposition submitted in this operation. Propositions will be awarded based on their attractiveness relative to a benchmark rate for each collateral type, and are subject to a minimum bid rate of 2.10 percent.

This is precisely what we said last Friday would be the Fed’s first line of defense, when we laid out what may happen after the dollar funding shortage arrives:

We are now at 1. If and when repo rates continue to rise even with the Fed’s repos in market, the Fed will have no choice but to launch either QE or start a standing repo facility.

For those who may have forgotten how repos work – which is to be expected in a world where all the excess funding was provided by QE – here is the explainer we provided last week:

Pre-crisis the Fed relied on two types of open market operations to manage funding markets and their balance sheet: (1) temporary repo or reverse repo operations (2) outright UST purchases. Repo operations were used to “fine tune” the amount of reserves in the banking system to hit the fed funds target rate while outright UST purchases were used to offset currency in circulation growth. As a reminder, currency growth – of which we have seen a dramatic increase in recent years as the amount of $100 bills in circulation has soared – eats away at reserves in the banking system; this would pressure fed funds higher if the Fed did not growth their balance sheet to offset this (Exhibit 1). 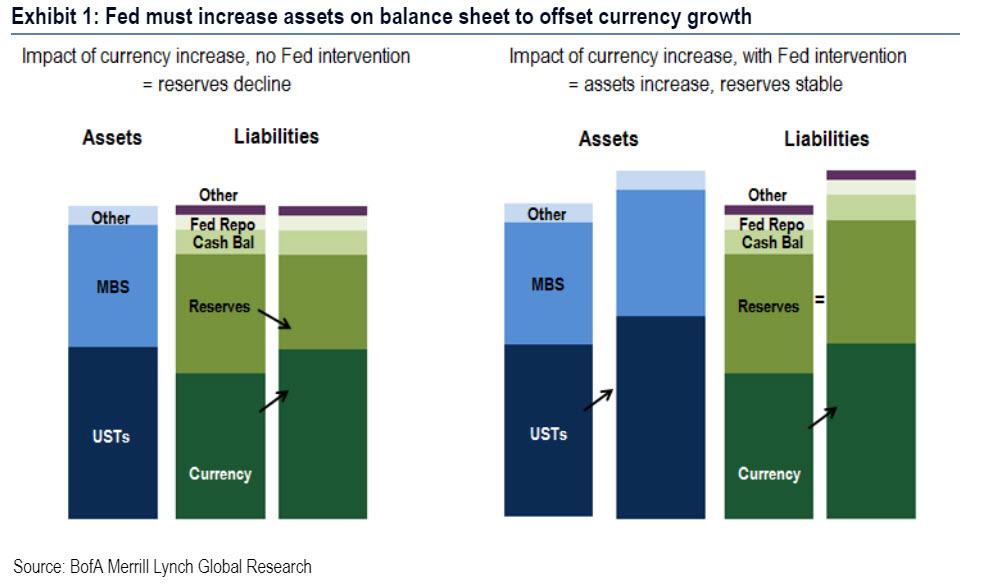 Next, Cabana provides some historical perspective on each of the temporary repo and permanent UST purchase open market operations focuses on those operations that add reserves. As funding pressures begin to emerge and likely worsen in Q4, the BofA rates strategist expects the Fed to step in and use both sets of tools to contain these pressures and keep the fed funds in its target range.

Temporary open market operations were a common practice prior to the crisis, when the Fed was in a scarce reserve regime. The New York Fed conducted frequent repo operations to fine tune the amount of reserves in the system and to ensure that the fed funds effective hit its target point. Below is a review of the mechanics of such repo operations as well as historical activity from 2000-2008. If the Fed conducts repo operations again to offset funding pressures, there will likely be parallels to their historical operations.

Temporary repo operations were executed in the tri-party market and were conducted only with primary dealers. Historically, repos were 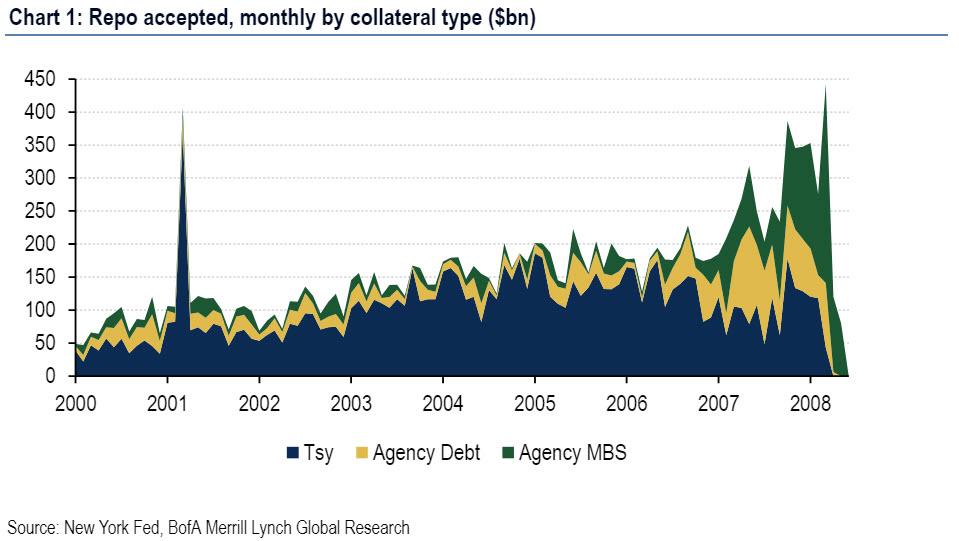 What to expect this time

If funding markets face stress in the next few months – which Bank of America expects will happen – the Fed could easily conduct repo operations to stem upward  pressure. Since the recession, the NY Fed has periodically conducted small repo operations in order to “test operational readiness.” There have been 21 operations in total since 2012 – which is somewhat bizarre considering there are well over $1 trillion in reserves floating around the financial system –  and the last set of Fed test repo operations was conducted in May. In the past few years the repo tests have been very small (around $23mn in size for USTs), were multiple price, and were overnight or matured in 2-3 business days. The tests have also been across UST, agency debt, & agency MBS collateral. The tests indicate that the NY Fed is prepared to conduct such repo operations at any time and that this is a readily available solution for any sharp increase in funding markets.

Something critical is going on in overnight funding markets: ever since March 20, the Effective Fed Funds rate has been trading above the IOER. This is not supposed to happen, and it just got significantly worse.

Or at least that’s the theory. In practice, the effective FF tends to occasionally diverge from this corridor, and when it does, it prompts fears that the Fed is losing control over the most important instrument available to it: the price of money, which is set via the fed funds rate.

Ever since March 20, this fear is front and center because as shown in the chart below, starting on March 20, the effective Fed Funds rate rose above the IOER first by just 1 basis point. The Fed attempted to technically tamp this down.. and failed. But today the Effective Fed Funds Rate has exploded…. 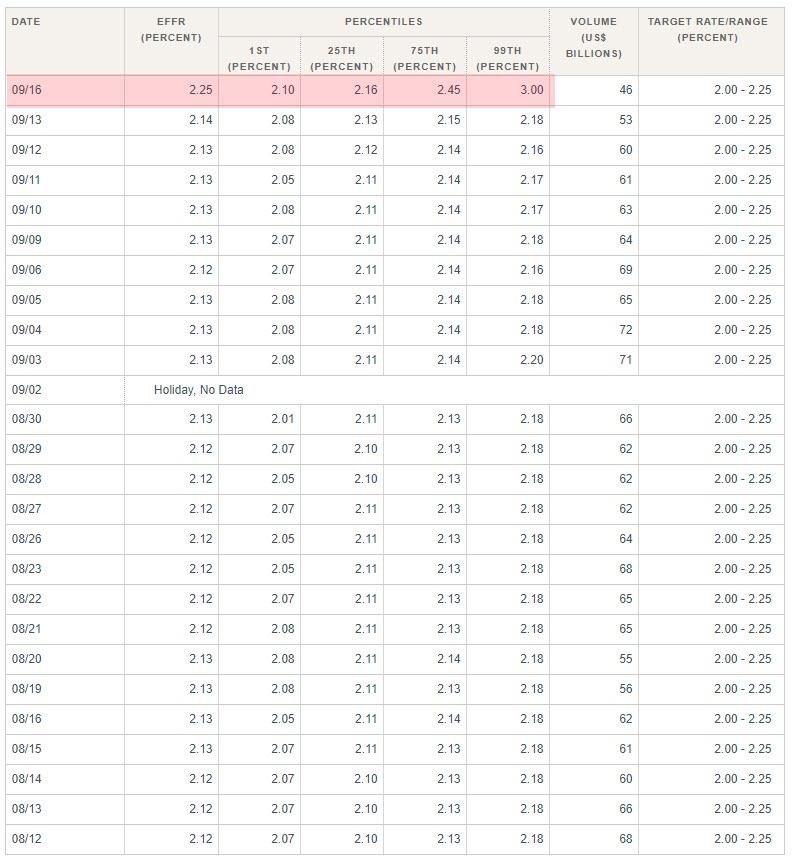 Smashing above the IOER…

As we noted earlier, no one is sure of what is driving this apparent liquidity shortage

The bottom line is simple – The Fed has lost control of its rate-control mechanism.

So what should the Fed do to regain control over interest rates?

According to Barclays to address the expected increase in fed funds volatility, the Fed, having ended the balance sheet runoff this summer instead of waiting until September, could create a standing repo facility – something which has been rumored for months – or conduct standard open market operations, injecting even more liquidity into the system.

But as we noted earlier, the problem for the Fed is that following today’s massive move in repo higher, it now appears that the Fed is once again behind the curve, and this time the funding squeeze could have dire consequences for not only the economy but the market, as the broken repo plumbing means that despite $1.4 trillion in excess reserves, one or more banks are suddenly left without liquidity, which as we explained over a month ago in “Forget China, The Fed Has A Much Bigger Problem On Its Hands”, the only alternative Powell may soon have is to restart QE.

But stocks are near record highs, because… The Fed.