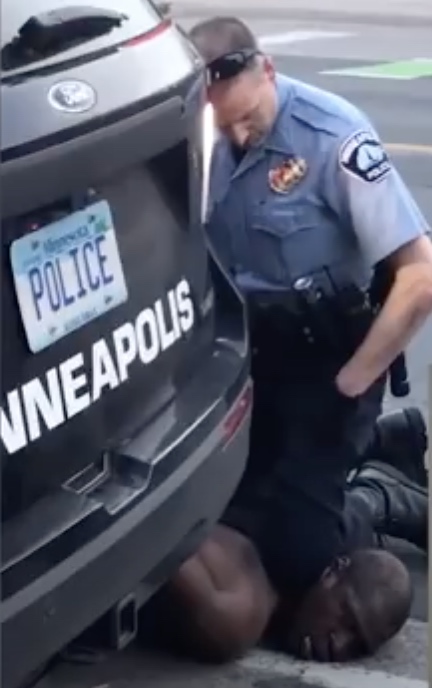 In many situations I’ve argued that police were right when violently taking down Black men. Looking closely at videos in those cases, I could see each time that Black criminals were resisting arrest in ways that I know would get me hurt as a White man. I have no doubt about it, and would not ever dare try what I saw some of those Black men trying that eventually resulted claims of racism and riots.

I’ve seen in some of the past situations that I would certainly have felt threatened if I were in the shoes of those officers or that others were being threatened, and I’m not naive enough to think you can always take down violent people without being violent.

I know you cannot use proportionate force as liberals sometimes argue for, if by that you mean only as much force as is being used against you or slightly more. That’s a recipe for getting hurt or killed, and a good officer should not have to risk even so much as a black eye or broken nose to do his job. I don’t get black eyes and broken noses for doing mine. Porportionate force, if you mean no more than absolutely necessary, is a plan for stalemate. You have to use overwhelming force against violence to take the violent down quickly and securely.

So, I’m not one who is hard on police or soft on crime, but the George Floyd case was clear execution by cop. All of the police shown in the arrest videos below were completely in the wrong, an all should go to prison as murderers or accomplices to murder.

George Floyd’s death was execution by cop in broad daylight

Solid video evidence below shows that George Floyd was intentionally executed in public by the police. You can see the intentionality in how long it plays out in the close-up video and in the complete lack of concern on the part of the police over the fact that they were being observed. You can see their smugness and overconfidence as they kill him. (It’s hard to watch in the really close-up video.)

People are right to protest this event, and I say that as one who has spoken against many protests where I believed the police were acting in reasonable defense against violent Black criminals and doing what was necessary to capture the violent.

As far as I’m concerned Black criminals don’t deserve any special treatment. Nor do White ones. I know in those cases where I felt the police were right, I would have wanted them to do exactly the same thing if it were a White criminal. Without any doubt.

George Floyd was a criminal

George Floyd, himself, had been a violent man in his past. His rap sheet included armed robbery for which he had been imprisoned for five years.

It’s also true that, people who knew him say he had improved, including his White fiancé, which would indicate to me he didn’t hate White people. One might doubt a fiancé just because she will stand by her man, but his employer also says George was very much liked by other employees and by the employer.

It’s also true that without his own life of crime and violence, Floyd might not have been in the position he was in when he allegedly purchased some cigarettes with counterfeit money, and he was clearly drunk or high at the time when he was arrested.

I understand, too, that the COVID-19 lockdown resulted in his layoff, and the economic recession we have entered may have made Floyd a desperate man once again. So, he may very well have shoplifted with fake money as accused or “underpaid” as the second video below states (a way of putting it that I find disingenuous on the narrator’s part).

Hard times, however, don’t justify Floyd’s alleged wrongdoing. I don’t have sympathy for people when they do bad just because they’re poor. I’ve known many poor people who would not do such things.

The fact is, people are mix of good and bad. George Floyd was in a bad way that day — doing some bad stuff. Floyd was not, however, resisting arrest in any significant way (if at all). He was not acting violently, and did not deserve execution by cop.

The video below is hard to watch, not just because you watch a man die, but because of the total indifference to his death as it is happening on the part of the main police officer killing him. It’s scary to think a police officer can kill a man in cold blood that casually, and it is clear he knows, at least at a later point in the video, Floyd is dying. Equall concerning is the complete indifference of the officer witnessing the murder who is holding back the crowd, something I’ll note is not taking any effort.

The video shows to my satisfaction that George Floyd was executed by police in broad daylight. They were so brazen they did it without a hint of concern about retribution, even in full knowledge that people were watching, protesting what was happening, and recording it. It is as if they feel completely invulnerable by virtue of their position. They clearly believe nothing bad will happen to them as a result of their actions.

The witnesses, on the other hand, protest the police action in an unbelievably peaceful manner — distressed but peaceful and respectful — given the murder they were witnessing. That speaks volumes about their own peaceful nature.

The police were not protecting themselves here. The casual calm shown by both officers proves they did not feel threatened by Floyd. The worst two things Floyd did in this situation was 1) to either lose balance or intentionally buckle his own legs to resist getting in the squad car. One cannot tell which by watching the video, since Floyd can barely stand anyway. 2) It appear Floyd may have been struggling to get back out of the squad car once he was in, but that is not clear either because shortly after, one officer drags him out and shoves him down onto the ground where three officers pin him. It’s not clear in any of that that Floyd was resisting arrest, but it is possible.

From that point on, however, Floyd showed no sign of resisting arrest, and he repeatedly agreed to get in the car if the police would let him. The officers — particularly the one with his knee on Floyd’s neck — continually and intentionally made that impossible.

Other officers outside the frame are also pinning him down. Ridiculouly, an officer tells Floyd over and over to “get in the car” when all officers present clearly knew they were the ones pinning Floyd to the ground. Floyd was never given the right to comply.

The observing officer who was holding back the crowd had a history of being charged with violence. He looked on without caring the entire time while Floyd clearly died as the officer, in ugly irony, took a knee to Floyd’s neck. The officers are so brazen in their display of power over Floyd that they appear to take smug pride in using that power.

The officer who killed Floyd is as nonchalant as if he is casually squishing the life out of a bug. He calmly crushes down on Floyd’s neck, almost smiling, until long after George Floyd is either clearly unconscious or dead from a broken neck, cut-off airway or pinched-off blood flow. To me, he looks dead on the scene, but it possible one of the officers out of view was taking his pulse the whole time to monitor the knee hold. I doubt it, and either way Floyd is declared DOA.

While Floyd claims many times he cannot breath, that is clearly not accurate, though I don’t doubt it felt that way or that I would have said the same thing in a panic. It’s clear he could breath, though perhaps with difficulty, for the simple reason that, if you cannot breath, you also cannot say sixteen times that you cannot breath.

I also noted that Floyd was saying this while he was standing before he was shoved to the ground and that he said he was claustrophobic. One of the symptoms of claustrophobia is that you believe you cannot breath even when you can. I note, too, that the officer doing the killing slightly lifts his knee a couple of times. Unlike what the narrator in one video says, he is clearly not pushing down with all of his weight because his other knee is also on the ground.

Nevertheless, at some point Floyd does stop breathing and lies on the road looking lifeless for minutes, and it obvious. Yet, the arresting officer continues crushing down on his neck. The whole time Floyd’s hands have been cuffed behind his back, meaning he’s hardly a threat.

The officers show no humanity. Nothing. It’s hard to watch; but, if you need proof that these officers were as cold-blooded as humanly imaginable and in no way in any danger from George Floyd or caught up in the intensity of battle, this is it.

(The narrator is annoying, but the video proof eventually is clear to me, even when the narrator sounds like he could, at first, be exaggerating some claims.)

I’m writing this because, I will be broad laying out how the protests got out of control across the nation in my next article and became overrun in some cases by violent and hateful people on both sides, I want to be clear I’m not saying the protests should not be happening.

In fact, I think many protestors are being quite constrained, considering how blatantly wrong this execution in broad daylight was and how little the cops feared reprisal for such wrong actions, and I think people should protest this clear abuse of power.