Visualizing The World’s 20 Most Profitable Companies

The biggest chunk of the earnings pie is increasingly split by fewer and fewer companies.

In the U.S. for example, Visual Capitalist’s Jeff Desjardins points out that about 50% of all profit generated by public companies goes to just 30 companies — back in 1975, it took 109 companies to accomplish the same feat:

This power-law dynamic also manifests itself at a global level — and perhaps it’s little surprise that the world’s most profitable companies generate mind-bending returns that would make any accountant blush.

Which Company Makes the Most Per Day?

Today’s infographic comes to us from HowMuch.net, and it uses data from Fortune to illustrate how much profit top global companies actually rake in on a daily basis. 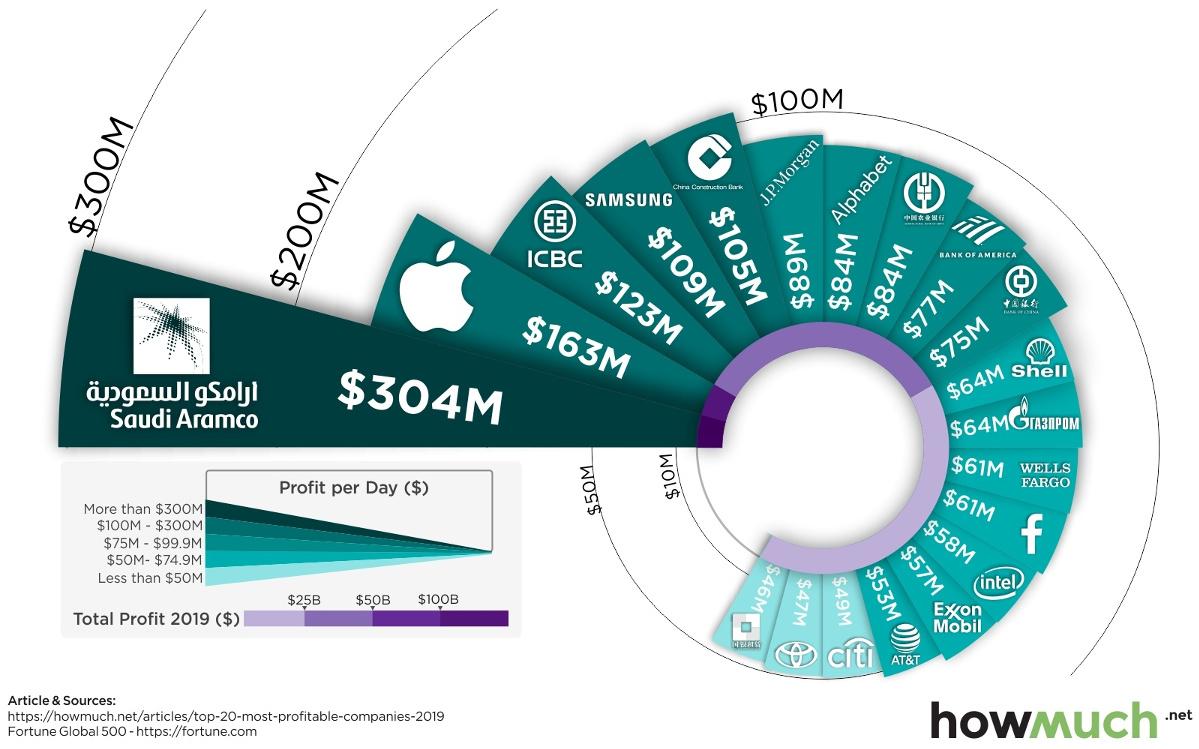 The 20 most profitable companies in the world are listed below in order, and we’ve also broken the same data down per second:

The Saudi Arabian Oil Company, known to most as Saudi Aramco, is by far the world’s most profitable company, raking in a stunning $304 million of profits every day. When translated to a more micro scale, that works out to $3,519 per second.

You’ve likely seen Saudi Aramco in the news lately, though for other reasons.

The giant state-owned company has been rearing to go public at an aggressive $2 trillion valuation, but it’s since delayed that IPO multiple times, most recently stating the listing will take place in December 2019 or January 2020. Company-owned refineries were also the subject of drone attacks last month, which took offline 5.7 million bpd of oil production temporarily.

Despite these challenges, Saudi Aramco still stands pretty tall — after all, such blows are softened when you churn out the same amount of profit as Apple, Alphabet, and Facebook combined.

Numbers on an Annual Basis

Bringing in over $300 million per day of profit is pretty hard to comprehend, but the numbers are even more unfathomable when they are annualized.

On an annual basis, Saudi Aramco is raking in $111 billion of profit per year, and that’s with oil prices sitting in the $50-$70 per barrel range.

To put this number in perspective, take a look at Chevron. The American oil giant is one of the 20 biggest companies on the S&P 500, but it generated just $15 billion in profit in 2018 and currently sits at a $221 billion market capitalization.